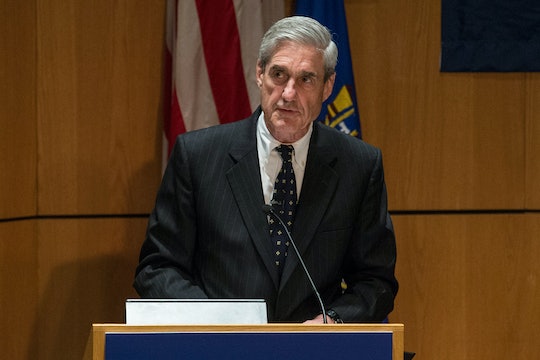 Here's What You Need To Know About Robert Mueller

In a rare show of bipartisan cooperation, Senators are teaming up to protect Robert Mueller from being fired by President Donald Trump. I would insert a Celebrity Apprentice joke here, but honestly, this is far too serious, so let's jump into it. First, of all who is Robert Mueller, and why is the most contentious Senate we've ever seen rallying behind him? Mueller is a former FBI director who held the position longer than anyone besides J. Edgar Hoover. He was so well-liked by both parties that the Senate confirmed him unanimously in 2001, and then in 2011, they passed unanimous legislation allowing him to stay on an extra two years. A very good dude, it would seem.

After Attorney General Jeff Sessions recused himself from the Department of Justice's Russia investigation, Deputy Attorney General Rod Rosenstein appointed Mueller, whom CNN described as a "nonpolitical, dogged investigator," as special counsel to see the investigation through. Everybody was cool with that. Then Mueller started doing his job. Trump was not cool with that. He's alleged a conflict of interest, since Mueller's former firm, WilmerHale, represents his daughter and son-in-law (the DOJ disagrees), and claimed Mueller's team is comprised of Clinton supporters, according to Politico. Four out of 13 have donated to Clinton in the past, but federal regulations prohibit Mueller and the DOJ from even considering the political contributions when choosing appointees, so honestly, what is he even on about?

For months, Trump and his surrogates have mused on whether the president might fire the man investigating him, something that White House Press Secretary Sarah Huckabee Sanders insists Trump "has the right" to do, although he "has no intention to do so." In fact, he does not. Only Rosenstein could actually fire Mueller — but Trump could order Rosenstein to do it. However, it seems unlikely that Rosenstein would comply with such a request. Enter Plan B: Trump could criticize Sessions publicly until he resigns, and then replace him with someone who's willing to fire Mueller. But not if the Senate has anything to say about it. Last week, Iowa Sen. Chuck Grassley, a Republican, said the Senate Judiciary Committee would not confirm a new attorney general, and South Carolina Sen. Lindsey Graham said he'd introduce legislation to protect Mueller.

Graham was just beaten to the punch by North Carolina Sen. Thom Tillis and Delaware Sen. Chris Coons, a Republican and Democrat, respectively, who plan to introduce such a measure on Thursday. Tillis told CNN that "The President would maintain the power to remove the special counsel," but "we just want to make sure, through judicial review, that it was warranted." The bill would also mandate that only an attorney general confirmed by the Senate could fire the special counsel, and it would apply retroactively to the day Mueller was assigned. This would prevent Trump from working his way through the chain of succession until he found a willing lacky.

And finally, amid the most unprecedented presidency of all time, we find some historical precedence! It's the Saturday Night Massacre. When President Nixon was under investigation for the Watergate break-in in 1973, he ordered his Attorney General, Elliot Richardson, to fire Special Prosecutor Archibald Cox. Richardson refused, and resigned. Nixon then appealed to Deputy Attorney General William Ruckelshaus, who followed suit. Solicitor General Robert Bork then became acting attorney general, he fired Cox at Nixon's behest. That's what finally led Congress toward impeachment, but it took nine months. If Tillis and Coons' bill passes, we won't have to relive that mess. And if its passage seems unlikely, consider that just last week, Congress passed a nearly-unanimous bill to prevent Trump from lifting sanctions on Russia. Finally, there's one thing both parties agree on.