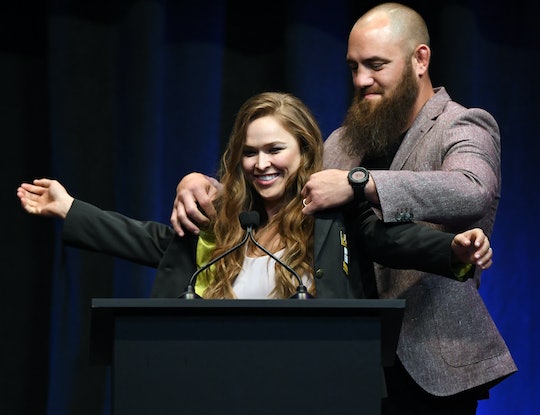 Everything We Know About Ronda Rousey's Husband, Travis Browne

She's one of wrestling's biggest superstars, an Olympian, and the first woman ever inducted into the UFC Hall of Fame. But this athlete also has a life away from the ring where she has been lucky in love. So who is Ronda Rousey’s husband? Her partner, Travis Browne, seems to be a perfect match for her.

As the U.K.'s Daily Mirror newspaper reported, Rousey is happily married to Ultimate Fighting Championship (UFC) fighter, Travis Browne. The like-minded pair, who were engaged in 2017 in New Zealand and married later that year in Browne's home state of Hawaii, have recently revealed they are trying to start a family in social media posts and a recent interview.

Browne, a UFC heavyweight veteran who is 6’7” and weighs more than 250 pounds, according to website MMA Mania, seems to be retired, or semi-retired, after some defeats.

The devoted husband, whose social media often includes his two kids — both boys — from a previous relationship, is rumored to be planning a career change, according to TMZ. Perhaps he's planning on joining the WWE in some capacity as a partner with Rousey? Wrestling fans would probably like that a lot!

For now, though, the pair, who post updates for fans regularly from their farm, Browsey Acres, have revealed that Rousey is taking a break so she can be in tip-top (and unbroken as far as bones go) shape for getting pregnant, as Rousey's blog revealed. (TMZ Sports clarified that, despite shifting gears, Rousey will remain affiliated with the WWE.)

Rousey's contribution to athletics has also earned her some nice dividends: Forbes named her one of the highest-paid female athletes of 2016, with some $14 million in total earnings. Money magazine noted this put her ahead of brand-name sports stars such as Danica Patrick.

Clearly, though, this trailblazer has her legacy on her mind: "I was at the mall and I saw a Victoria's Secret models' picture and she's sweating with her hands in wraps... and I was like, I f--king did that. I enjoy the effect that I've had and I can't wait to see my daughters enjoy that," she said on a video interview shared on her blog.

As for her husband, Browne has also needed time off this year. Rousey's hubby needed to recuperate from bone spur surgery for one, as the U.K.'s Sun newspaper confirmed. According to Mayo Clinic, bone spurs "are bony projections that develop along bone edges," which can cause pain and swelling.

The medical site also claims bone spurs are often caused by osteoarthritis, because it "breaks down the cartilage cushioning the ends of your bones." That sure sounds painful, doesn't it?

Here's to hoping Browne has a full recovery as he and Rousey work on starting a family. Though it's likely safe to say that even having a baby won't stop either one of these athletes from stepping back into the ring... no matter which ring they decide they want to be in.