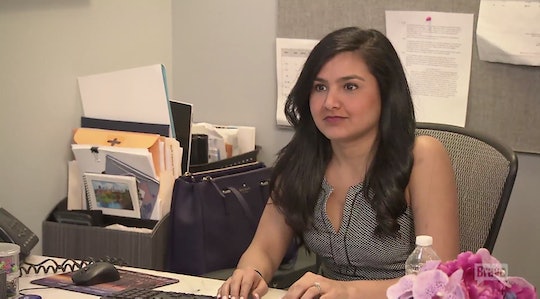 When Million Dollar Listing New York fans first met Ronnie, she was working as Luis D. Ortiz's assistant. He parted ways with the show in 2016 amidst a tough battle with depression and suicidal thoughts, but Season 8 sees his return — and a request for more responsibilities from his former assistant. But for newcomers to the show, or longtime fans who need a refresher on who Ronita Kalra from Million Dollar Listing New York is, exactly, here's more on the agent.

Though she was always portrayed as Luis' assistant on the show, Ronita, or Ronnie, as she's sometimes nicknamed, is a Licensed Real Estate Broker in her own right. She's been working at Douglas Elliman Real Estate since 2013, and with Luis for the past three years. The company website bills them as "The Luis D. Ortiz and Ronita Kalra Team," so it seems like they're on their way to a more equitable partnership.

When Luis popped up in Season 8, Ronita — who, by the way, seems to have her own office now — was clearly shocked by his return. After confirming that he was indeed coming back to real estate, she gets into the tough questions, saying, "You took over and I didn't really get much of a word in."

Prior to working in real estate, Ronita held positions at Apple and BMI, according to her LinkedIn profile. She even interned at Merrill Lynch while studying economics at Rutgers University, so she seems beyond qualified to angle for a bigger slice of the Million Dollar Listing New York pie. Ronita got married in December 2016 to a Merrill Lynch Analyst Telationship Manager named Benjamin Nerl (yes, they were there at the same time), and the pair welcomed a daughter named Lyanna on Apr. 3, 2018. The family now lives on the Upper East Side.

Ronita's Instagram is full of baby updates and Lyanna even has her own dedicated story highlights reel, along with a pregnancy highlights reel entitled "Bump Life." She certainly appears to be a super dedicated mama who's very much enjoying life with a toddler.

She's also first generation Indian-American and fluent in Hindi, according to her Douglas Elliman website bio. There, it says that she grew up in her dad's Manhattan showroom, steeping in her own immigrant parents' entrepreneurial spirit. She was born in Flushing, NY, but primarily grew up in New Jersey, and she's lived in New York City for the past ten years.

From the looks of Ronita's Instagram, she's definitely killing it at work, too, with plenty of her New York City listings on display. She even posted a video of Luis touring a gorgeous renovated West Harlem brownstone ahead of his return to Million Dollar Listing New York. The MDL franchise has been very dude-focused for most of its existence, so it would be nice to see Ronita get a little more shine this season as Luis returns.