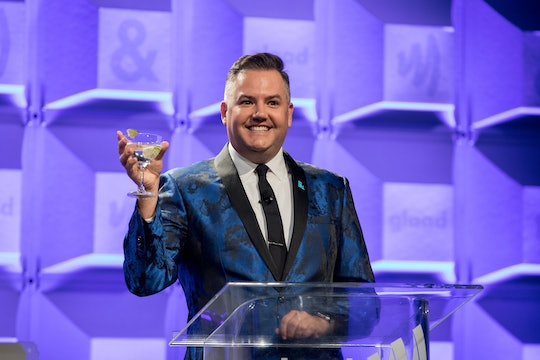 Even though Celebrity Big Brother just ended in the U.K., it's only just beginning in the U.S. On Wednesday, Feb. 7, 11 celebrities will move into the Big Brother house and compete for the $500,000 grand prize in an expedited version of the game. One of the new houseguests is Ross Mathews, but who is Ross on Celebrity Big Brother? You've definitely seen him on your television screens before.

Ross first came to fame when he was an intern on The Tonight Show With Jay Leno. He literally became known as "Ross the Intern," a nickname that is still occasionally used for him today. However, eventually Ross became a star in his own right. In 2007 he appeared on another reality competition series, Celebrity Fit Club, and then following year he scored a recurring role on Days of Our Lives and appeared on the soap opera from 2008 to 2011.

Then in 2014, his book, Man Up!: Tales of My Delusional Self-Confidence, was published as a part of Chelsea Handler's series of books and became a best seller. Ross is also a champion of LGBTQ rights, often supporting the Human Rights Campaign. He was even made Grand Marshal at the Miami Beach Gay Pride parade last year. He also began his own business, Swank LA, that sold stone, tile, and hardwood that could be delivered directly to your home. However it looks like the business is no longer running.

Besides all of that, what Ross is really best known for is being a TV personality. Ross has had a long running relationship with E! beginning with hosting a number of their specials like E! 50 Super Epic TV Moments and E! Special Celebrity Oops: They Did It Again. He then began working on Chelsea Lately, appearing as part of Chelsea's Round Table and even taking over as host of the show for an entire week.

With his success on Chelsea Lately it wasn't surprising that E! then gave Ross his own show, Hello Ross!, which was produced by Handler. Unfortunately, the show was cancelled after two seasons. Despite this, Ross continues to sometimes act as a correspondent for E! Live from the Red Carpet.

He's also gone on to do other things like occasionally co-host The View and regularly co-host Hollywood Today Live. He's been a judge on RuPaul's Drag Race and RuPaul's Drag Race All Stars and has continued to appear on a number of reality series like Celebrity Food Fight, Celebrity Name Game, and most recently he and his family were on Celebrity Family Feud. So it's not all that surprising that he signed on to do Celebrity Big Brother, though this will probably be different than any reality TV experience he's ever had.

In his cast bio, Ross revealed the most difficult part of living inside the Big Brother house will be "being cut off from the outside world, my family, and pop culture." He also said that, if he could, he'd bring his chihuahuas and Wi-Fi into the house and revealed that he plans on running for mayor of Palm Springs someday. He can also name all 21 of Meryl Streep's Oscar nominations, which may not be a skill that helps him win Celebrity Big Brother, but it's still noteworthy.

As for Ross' strategy he plans on playing a social game. "[I will] run the show from behind the scenes, be a BFF to everybody and let them underestimate me," he said in his bio. You can see how Ross and the other celebs do when Celebrity Big Brother premieres Wednesday, Feb. 7 at 8 p.m. ET on CBS.