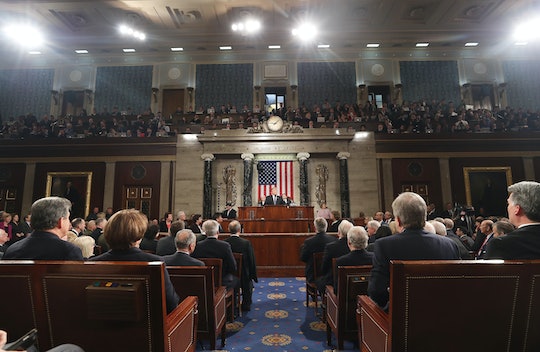 President Donald Trump delivered his first speech to the nation on Tuesday night, providing updates on his time in office thus far to a joint session of Congress. While his remarks were much calmer and positive than ones in the past, specifically his inaugural address, there was a moment during his address that left everyone visibly emotional: when Trump acknowledged the widow of U.S. Navy Special Operator, Senior Chief William "Ryan" Owens. But, who is Ryan Owens' Wife? Carryn Owens was an honored guest at Trump's joint address to Congress that brought nearly everyone in the room to their feet.

While Trump hailed Owens as being a “warrior, and a hero — battling against terrorism and securing our nation,” the raid in which Owens was killed has been deemed controversial across party lines and has been criticized for reportedly being unnecessary, or, as some have argued, a failure. Of course, Trump tried to blame the failure of the raid on the previous administration, but the fact remains that Owens was killed in the line of duty, but that argument did little to appease critics on Tuesday.

The strength of Owens' wife, Carryn, however, was palpable at Trump's joint address, regardless of any political bickering. When Trump mentioned Owens, almost everyone in the room was brought to their feet, happy to honor the wife of a fallen American.

In a room divided by politics, votes, states, morals, and beliefs, the majority of the room standing in respect for Owens was a powerful and important moment. Regardless of whether audience members agree or approve of Trump, Owens' grief was palpable, and it mattered. However, that's not all that mattered.

Notably absent from the joint address was Owens' father, William, who declined an invitation to the White House after Ryan's death, calling for an investigation into the botched mission. In an interview with the Miami Herald, Owens said:

Why at this time did there have to be this stupid mission when it wasn’t even barely a week into his administration? Why? For two years prior, there were no boots on the ground in Yemen — everything was missiles and drones — because there was not a target worth one American life. Now, all of a sudden we had to make this grand display?

While Owens' father was absent, Carryn's presence and standing ovation did serve to unite members of Congress at a time when so many across the nation seem to be stringently divided. Though you may not be pleased with the outcome of the election, or Trump's performance thus far, Carryn Owens' grief is important, and U.S. Navy Special Operator, Senior Chief Owens deserves to be honored.