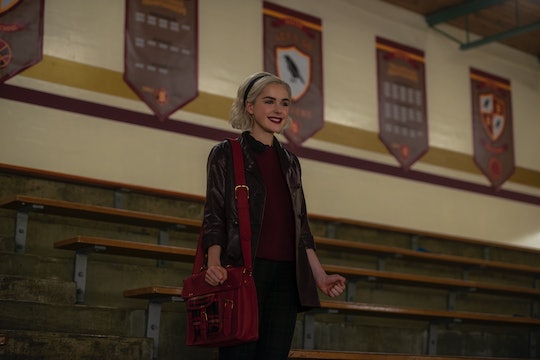 Sabrina has spent a good amount of the Chilling Adventures Of Sabrina series trying to answer questions about herself. Is she witch or mortal? Good or evil? In love with Harvey or Nick? A Baxter student or head boy at The Academy of Unseen Arts? Unluckily for her, she should've been asking an entirely different question. Not "who is Sabrina?" but rather, "who is Sabrina's real father?" Because as the Part 2 finale reveals — It might not be Edward Spellman. But don't get too excited because living or dead, when you read the answer — you're going to want to go back to that time a second ago when you didn't.

More Like This
Nick Scratch Is An Important Warlock On The Chilling Adventures Of Sabrina
Peppa Pig Is Going Camping In A New Live Show & You’re Invited!
Here Are 25 Shows You Can Feel Good About Your 2-Year-Old Watching
What To Stream Right Now For Kids Who Love History

Spoilers ahead for The Chilling Adventures of Sabrina Part 2.

Don't hate the messenger, but Sabrina's dad is actually (maybe) the Dark Lord himself. To make matters even worse, Hilda was the only person who suspected anything. Did that reveal sting even more than the first one? I'm sorry — I should've warned you. When I first learned this paternity secret and who its keepers were, I felt betrayed by Hilda the most.

The Dark Lord is who he is. His evil is right there in his unholy name. There's not even many games involved in it. No "He Who Must Not Be Named" or recruiting followers in secret nonsense. His followers sign their names in a book for Hell's sake.

But Hilda? She's sweet! So, when I learned the story behind Sabrina's conception — that when the Spellmens went to the Dark Lord for help when Diana was having trouble getting pregnant and he impregnated her with his child instead of Edward's — I went to Twitter to figure out everyone else's feelings on the whole thing.

Thankfully, I'm not alone in feeling um... completely petrified about the fact that Sabrina's now technically the Queen Of Hell, whether she likes it or not:

Here's the thing, though. The actor who plays the Dark Lord in human form — Luke Cook — is very attractive and Twitter is definitely not afraid to say it:

Cook told ET Online that the cast was as surprised as we were when they read that the Dark Lord was Sabrina's dad at the episode's table read. "I mean, we'd been talking about The Dark Lord for two seasons and then I come in and I'm like, 'OK, well, that's a big twist!'"

He also has a great sense of humor about it, which is probably necessary when you're shooting such twisted scenes together. "I told [Kiernan], I'm your 'zaddy' just for fun," Cook said. "I don't know what it means but I love saying it."

And then there's the whole thing where Nick sacrificed his body for Sabrina. The Dark Lord is using Nick's body instead of Sabrina's like he had hoped to. So technically we don't know if Cook's body will be on set for Part 3. Inquiring minds on Twitter are not shy about wanting to know the answer.

Cook is not shy about what he hopes the answer is. "I wish I could answer that for you," he said. "I don't even know myself, it's all a mystery. I hope so! I haven't heard anything, but fingers crossed. Hail, Satan!"

Thanks but no thanks, Cook. I'll stay safely on Sabrina's team.