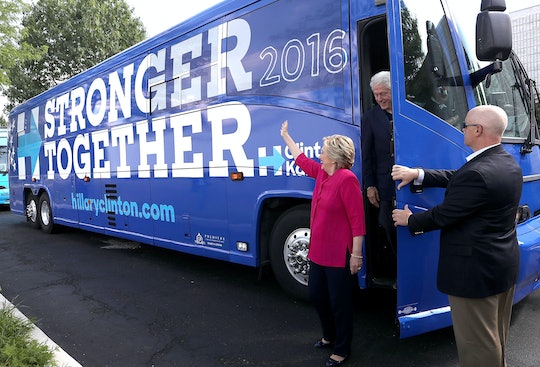 Who Is Sally Bradshaw? The Former Jeb Bush Adviser Made Waves With Her GOP Exit

In an exclusive interview with CNN this week, long-time Republican adviser Sally Bradshaw announced that she intends to leave the Republican Party because she can't support nominee Donald Trump. The news, which sparked a media firestorm, prompted those outside the beltway to wonder: Who is Sally Bradshaw? The former Jeb Bush advisor has worked with the Bush family since 1988, when she campaigned for George H.W. Bush, and is a well-known and popular figure among Washington insiders, according to The New York Times.

In an email exchange with CNN's Jamie Gangel, Bradshaw meticulously outlined the reasoning behind her dramatic decision. "This is a time when country has to take priority over political parties. Donald Trump cannot be elected president," Bradshaw said. She specified that she has registered with no party affiliation, and will vote for Democratic nominee Hillary Clinton if the race in her home state of Florida proves "close."

Bradshaw's move is significant because, while many Republican leaders have repudiated some of Trump's more repugnant remarks, none have said they will vote for Clinton or leave the party. Texas Sen. Ted Cruz refused to endorse Trump, but he's most certainly still a Republican. In her thorough denouncement of the Trump candidacy, Bradshaw said,

This election cycle is a test. As much as I don't want another four years of (President Barack) Obama's policies, I can't look my children in the eye and tell them I voted for Donald Trump. I can't tell them to love their neighbor and treat others the way they wanted to be treated, and then vote for Donald Trump. I won't do it.

Bradshaw enumerated the details of her internal struggle—a struggle that many Republicans are surely having. She weighed a Trump presidency against supporting Clinton, a candidate who opposes many of Bradshaw's core beliefs. She wrote,

That is a very difficult statement for me to make. I disagree with her [Clinton] on several important issues. I have worked to elect Republicans to national and statewide offices for the last 30 years. I have never voted for a Democrat for president, and I consider myself a conservative, a supporter of limited government, gun rights, free enterprise, equality of opportunity. I am pro-life.

Stating that Trump is a "narcissist," a "misogynist," and a "bigot," Bradshaw concluded that Trump is the greater of two evils, and directly called out fellow Republicans for not doing enough to prevent his candidacy—and, now, his possible presidency.

On Twitter, Republican reactions to Bradshaw's announcement ran the gamut. One user, who identifies as a volunteer for the Trump campaign in Arizona, believes that Bradshaw's actions are in line with a "globalist" conspiracy.

GOP strategist Ana Navarro was more understanding, tweeting that Bradshaw is a "loyal GOP soldier," while Trump is an "embarrassment."

Bradshaw's announcement came on the heels of controversy about Trump's statements regarding Khizr and Ghazala Khan, the Muslim-American parents of a young American captain killed in Iraq in 2004. The Khans had spoken out against Trump at the Democratic National Convention, and Trump suggested in subsequent television interviews that Ghazala, the mother, was silent during the couple's DNC appearance because Muslim women aren't allowed to speak.

In an op-ed at The Washington Post, Ghazala responded to Trump's remarks, explaining that she didn't speak at the DNC because it's too difficult to talk about her dead son. "Walking onto the convention stage, with a huge picture of my son behind me, I could hardly control myself. What mother could?" she wrote.

Trump's outrageous comments about the Khans drew censure from the likes of former GOP presidential candidate Jeb Bush and House Speaker Paul Ryan, but, as with past Trump scandals, Republican leaders repudiate Trump's words, but continue to support his candidacy. In contrast, Bradshaw called Trump's remark about Ghazala Khan "despicable," saying that it "reinforced" her decision to leave the Republican Party.

With the election less than 100 days away, the future of America depends on more in the GOP coming to the same conclusion.