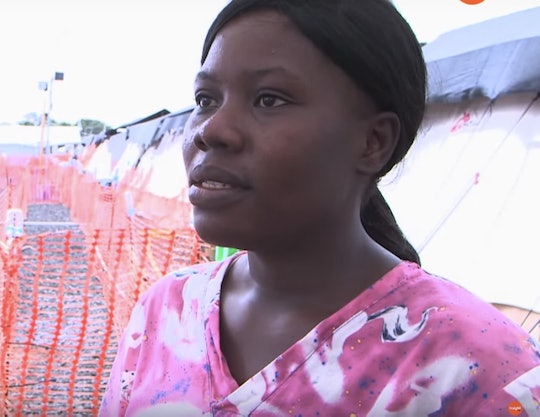 While a number of significant deaths this year have already left many across the globe in mourning, there’s one important death that might have been passed over by newsfeeds and pushed out of the headlines for other political happenings. Salome Karwah, TIME’s 2014 Person of the Year, passed away on Feb. 21, 2017. Karwah died from delivery complications after childbirth in Liberia, after surviving the Ebola outbreak that plagued the country in 2014. So, who is Salome Karwah? The Liberian Ebola survivor's death shows that stigmas can prove to be deadly, and that mothers giving birth is still very much a dangerous occurrence — despite technological advances — and should always be taken seriously.

Karwah made waves back in 2014 when she, her sister, and her fiancé all miraculously survived the Ebola virus that spread through her hometown. While Karwah did contract the disease, she overcame it, and after being released from the hospital, she took it upon herself to volunteer as a nurse and help the sick. As she was immune to the disease, she was able to provide hand-to-hand contact to patients and patients’ families, providing a level of care that most weren’t able to receive, or give.

As the outbreak began to wind down, things began to settle for Karwah. Post-outbreak, she lead a pleasant life, making the most of everything and appreciating the second chance she had been given.

After giving birth to a healthy baby boy named Solomon, delivered by a caesarean section procedure on Feb. 17, all seemed well for Karwah. However, a few days after giving birth, Karwah was released from the hospital to go home with her fourth child. It was then that tragedy struck. According to a report by TIME, from the journalist who originally wrote Karwah’s story:

Within hours of coming home, Karwah lapsed into convulsions. Her husband and her sister rushed her back to the hospital, but no one would touch her. Her foaming mouth and violent seizures panicked the staff. “They said she was an Ebola survivor,” says her sister by telephone. “They didn’t want contact with her fluids. They all gave her distance. No one would give her an injection.” Karwah died the next day.

The horrific details of Karwah’s death should spark fire in the hearts of every human being. Karwah dedicated her life to helping and healing others. But when her life was on the line, doctors and nurses were too afraid of her to do anything. And while it’s unclear what exactly caused Karwah’s seizures to happen in the first place, it (unfortunately) isn’t surprising. According to Partners in Health, the Liberian government spends just about “$50 per person per year on healthcare” — and for expectant mothers like Karwah, that can be a death sentence.

This sad fact, along with the stigma of Ebola survivors, painted a dark picture for Karwah, and it continues to paint a dark picture for women all over the world who, like Karwah, may not survive childbirth for any number of reasons. Given how far medical technology and advances have come in recent years, this is unacceptable.

While Karwah may be gone, her legacy lives on as a reminder that women deserve equal and proper access to health care, especially (although not exclusively) when they are quite literally bringing another human being into the world.