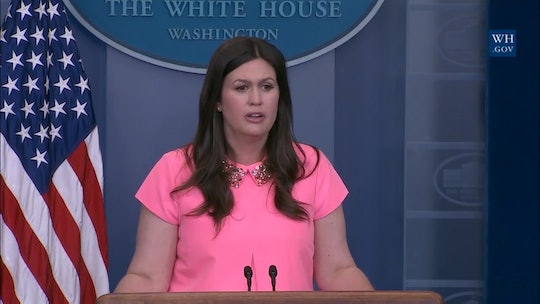 Who Is Sarah Huckabee Sanders?

If you watched Friday's White House press briefing, you may have noticed that a certain gum-chewing angry person was absent from the podium. Instead, a not-so-familiar face stood in his place to brief reporters on the American Health Care Act that passed in the House Thursday. So who is Sarah Huckabee Sanders? She is campaign adviser-turned-deputy spokesperson for the Trump administration.

President Donald Trump brought on Huckabee Sanders to serve as his administration deputy press secretary. Friday's press conference was her first on-camera briefing in that role, although she has previously spoken to reporters in place of her boss, White House Press Secretary Sean Spicer, according to the Hill. Huckabee Sanders has appeared on ABC News to defend Trump's wiretapping claims, as well as his decision to skip the White House Correspondents' dinner last month.

But before she served as deputy press secretary for the White House administration, Huckabee Sanders acted as Trump's senior campaign adviser. According to Cosmopolitan, she was hired after her father, former Republican Gov. Mike Huckabee of Arkansas, dropped out of the 2016 presidential race.

At the time, Huckabee Sanders said in a statement that she took on the role because Trump "is a champion of working families; not Washington-Wall Street elites," Cosmo reported. I'm not sure if she was talking about a different Trump.

According to CNN, Huckabee Sanders was filling in for her boss on Friday while Spicer fulfilled his Navy reservist duty at the Pentagon. Trump was also nowhere to be found in the White House; the president has decided to spend the weekend in Bedminster, New Jersey, to spend the weekend at his home at Trump National Golf Club, CNN reported.

As one would expect, Huckabee Sanders dodged reporters' questions on Friday about why Trump had decided to work from his home in New Jersey instead of his office on Capitol Hill. Instead, she told the press pool, "The bottom line is that the president is the president no matter where he goes," the Washington Post reported.

When pressed, Huckabee Sanders said that the president's first weekend trip to the Garden State will "save the taxpayer money" because he won't be in New York, where there would be "much greater disruption and a much greater cost to taxpayers," the Washington Post reported. Problem is, it costs hundreds of thousands of dollars a day to fund security detail for Trump's visits to his properties outside of Washington, D.C., according to CBS News.