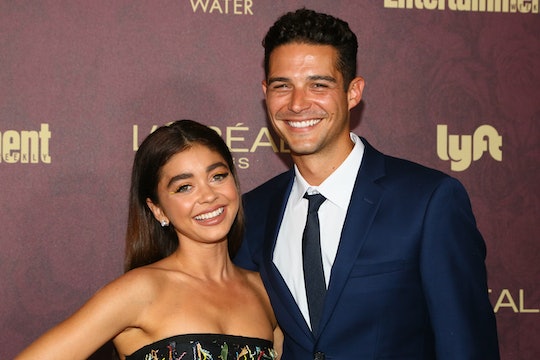 It's an exciting day in Hollywood, folks. That's because Modern Family star Sarah Hyland is officially engaged, having shared the news on Tuesday via Instagram. And now some fans might be wondering: Who is Sarah Hyland's fiancé? As it turns out, the actress is engaged to none other than Wells Adams, that incredibly handsome suitor from JoJo Fletcher's season of The Bachelorette. Squee!

As E! News reported, the happy couple have been dating for well over a year, after first connecting on Twitter. Adams was based in Nashville at the time while Hyland was in Los Angeles, so the couple's beginning included a lot of long distance dates. The pair eventually decided to give it a go in one household, however, with Adams packing up and moving to Tinseltown in August. The two have been happily living together ever since, along with their combined squad of three dogs, according to People.

So, how did Hyland announce the amazing news? She shared the most adorable shot of herself and Adams on a beach, a shot she captioned: "That can't eat, can't sleep, reach for the stars, over the fence, world series kind of stuff @wellsadams."

The post received the approval of her countless pals, including Nick Jonas, who sent over a heartfelt congratulations to the happy couple. Meanwhile, on Adams' Instagram, he shared the same beautiful engagement pics, along with the lyrics, "I’ll be Johnny, you be June. But forever." You might recognize the tune from the band, Drew Holcomb & The Neighbors.

Oh, and I did I mention that Adams made a video out of the engagement photos? The sweet creation gave fans the chance to watch the proposal from start to finish.

"When we get married will I automatically acquire your talent for making everyone cry with a homemade video?" Hyland commented on the adorable post. She followed up her gushing comment with, "I love you to Pluto and back FIANCÉ!!!!" Awww.

Of course, countless Bachelorette and Bachelor alums have come out of the woodwork to congratulate the couple on their happy news.

Yep, it's clear the two have the support of #BachelorNation.

Congratulations aside, however, some fans might have questions about Adams' background. Before he met Hyland, he "worked as a radio host in Nashville, including iHeartRadio stations Alt 98.3 and 105.9 The Rock," according to People. Adams then went on to star on Fletcher's season of The Bachelorette, but he didn't win the season (obviously).

After leaving The Bachelorette, he appeared on Bachelor in Paradise, the franchise's spin-off dating show. Adams didn't find love there, but he did score a gig as the resident bartender. And it was through Bachelor in Paradise that Hyland first caught sight of Adams. "I saw him as the bartender and I was like, ‘That’s really cute!’” she said, according to Cosmopolitan.

After syncing up on social media, the two realized that they shared a major passion for tacos. “I love tacos, he loves tacos … we both love tacos,” Hyland revealed at the time. “We have an obsession with tacos. Tacos and tequila, it’s our thing.”

Translation: Sarah Hyland has snagged a good one. Congratulations to the actress and her new fiancé, Wells Adams.