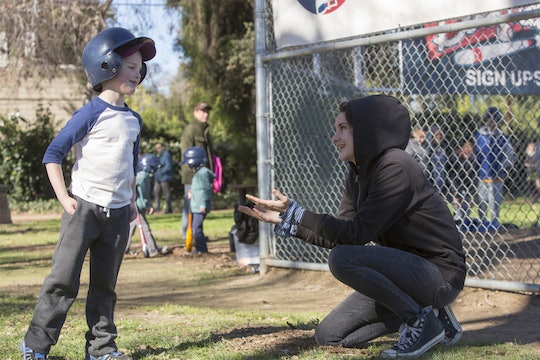 As HBO's limited series Big Little Lies goes on, elements of the mysteries surrounding the characters seem to fall into place. While the overarching mystery is who was murdered on Trivia Night and why, each character seems to be hiding something. Jane, the newcomer of the group, is especially secretive. On Sunday night's episode, her son Ziggy begged to find out his father's name, but Jane wouldn't budge. Once out of Ziggy's earshot, Jane told Madeline who it was: Saxon Banks. Who is Saxon Banks on Big Little Lies? His memory haunts Jane six years later.

Since the premiere, we've seen a flashback of Jane running on a beach in a torn dress. In another flashback in this episode, we see that she seems to be chasing after a man. This is intercut with her lying on a bed, and moving around a hotel room. These images were triggered by Jane talking about Saxon Banks, the man who assaulted her; the attack resulted in Jane becoming pregnant with Ziggy. She confessed this all to Madeline after they were working on a family tree project with Ziggy and Jane refused to name his father. According to Jane, Madeline is the first person to know about this.

The encounter with Banks is still fresh in Jane's mind. Not only does she have Ziggy, but she has her flashbacks and, as we saw on Sunday's episode, hallucinations of someone breaking into her apartment. So, who is Saxon Banks/Ziggy's father? Jane just moved to Monterey, so it may not be any of the men we know in the show. She may have moved there to escape her past, but it's evident that it's following her — at least in her head. (Warning: major spoilers from the novel ahead!)

If you've read the book iteration of Big Little Lies, you know that Saxon Banks is closer to Jane in Monterey than she ever imagined. He is Perry, Celeste's husband, who assaulted Jane during one of his business trips away. The reveal is made on that infamous Trivia Night, and suddenly all the pieces of said puzzle fall together. For what it's worth, some vengeance is served to Saxon Banks/Perry: he is the one murdered that night. As of Episode 3, though, it's unclear whether these plot points of the novel will stay true in the series. Regardless, in both texts Saxon Banks is definitely a villain who shaped Jane's entire life.