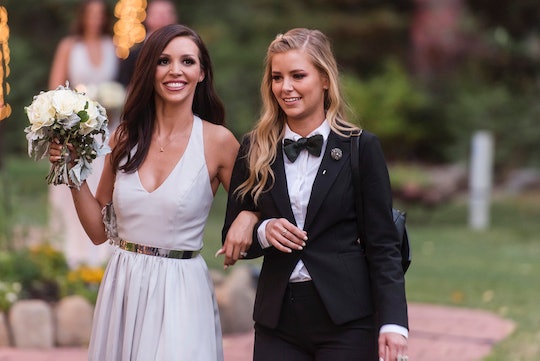 'Vanderpump Rules' Scheana Has A New Man In Her Life

Although this season of Vanderpump Rules ended in Katie and Tom's epic getaway wedding, it also ended with divorce. In the season finale, Scheana Marie had finally had it with her husband Michael Shay, after he left their house and stayed away for two weeks. Michael took his suitcase and left amid a tearful conversation that would eventually lead to their divorce. During the reunion, Scheana said she's dating someone else, causing Michael to break down again in front of Andy Cohen and the whole crew. Although true Vanderpump fans have been following and speculating about her new romance all winter. The 31-year-old is still in the midst of divorce, but is reportedly dating Robert Valleta, the brother of actress Amber Valleta.

Talk about making moves. If her great new haircut and demeanor during the reunion are any sign at all, Scheana seems to be doing just fine without her husband of two years. A source told People in February that she's taking things slow, but digging her new romance. "In Scheana’s previous relationship she carried the weight, in regards to finances and responsibility. It’s refreshing to see her with somebody who matches her own ambition and work ethic," the source stated.

Although Scheana and Michael released a statement saying that they're trying to be friends and support each other, leading up to the reunion, they reportedly hadn't spoken in almost two months. "It wasn't an amicable last conversation we had," she said. Scheana was also visibly nervous for Michael to come to the reunion. She said that when the producers said Mike was coming on, she had a "full-blown panic attack," adding:

I was like, I need a shot or I need something. I was just freaking out, and I didn't think I was going to be so emotional. But it was just everything coming back at once, and it was really difficult," she said. "And then I see him and he's sitting right in front of me, and he looked so different. Like, his shoulders were really buff and he had his ears pierced and his hair was different. I was just like, 'Who are you?'

Though we won't know what really goes down until Monday, April 17 when part three of the reunion airs. It's going to be super emotional, especially since Scheana hasn't been super shy about showing off her new "happy place" as she calls her relationship with Valleta on Instagram.

Breaking up is never easy — and neither is divorce — but sometimes it's the best thing for both people. Anyone who watches Vanderpump Rules and has seen all the #DRAMA Scheana and Mike have been through know that she tried to make it work. At this point, moving on is the only thing to do.