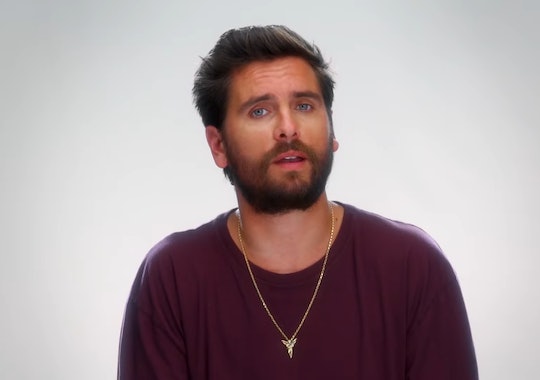 Scott Disick Has Moved On From Kourtney Kardashian, But He's Still On 'KUWTK'

Most people know Scott Disick as the father of Kourtney Kardashian's three children. However, the on-again-off-again couple has been off for a while now, and both of them have made headlines for dating new partners. That said, who is Scott Disick dating now? Even though his new bae isn't a KarJenner, he is still a part of Keeping Up With the Kardashians.

Scott Disick, 35, is dating Sofia Richie, 20. Richie is the daughter of Lionel Richie and the sister of Nicole Richie. This summer, Scott finally addressed the relationship — and the age gap — on Keeping Up With the Kardashians. “This is the first time I’ve ever been with anybody different, it’s been a really good thing for me,” Scott told the cameras in a confessional, according to InStyle. “It’s a little bit different for me to talk about things that are going on now. Sometimes I feel guilty that I’ve moved on.”

In that same episode, Kim Kardashian also pressed Scott about his relationship with Richie. “Do you ever find yourself in a moment when you're like, ‘grow up’?” she asked him, as per InStyle. "Not at all. I feel like she tells it to me," he responded.

And last month, Sofia Richie spoke with The Sydney Morning Herald about their relationship. "We are very happy, very lovey dovey," Richie told the newspaper. "We are best friends and that is mainly the strongest connection we have. We have always had that best friend connection and from there it has really worked out. I am so happy."

Disick and Richie were first spotted together in May 2017, when she was 18 years old — on a yacht in Cannes according to People. At the time, Richie commented on the romantic rumors about her and Disick on Twitter. "Just so everyone can get their panties out of their a**es, Scott and I are just homies," she posted in a since-deleted tweet at the time, E! Online reported. Looks like things have changed!

Not to mention, Kourtney, 39, has also moved on — she was dating model Younes Bendjima for almost two years, but they split this past August, as the Huffington Post reported. Bendjima is 14 years Kourtney's junior.

Even though Richie and Scott have made it very clear to the world that they are happy together, a few Kardashians still can't let the whole Kourtney and Scott thing go. In Season 15, Episode 8 of Keeping Up With the Kardashians, which aired in late September, Kim decided the former couple should have a fourth child together. So, as Refinery29 explained, Kim schemed to convince the two to consider IVF. And when Kourtney found out about it (via Khloé, of course), it became clear that the plan was never going to happen. "It's f*cked up," Kourtney said in a confessional, according to Refinery29. "I feel like it never ends with my sisters and I fighting."

The primary reason Scott gets to stay in the Keeping Up With the Kardashians universe is because he is the father of Kourtney's three children — but the family's continued affection for him is totally clear. Perhaps if things remain strong between Scott and Richie, she will appear in future episodes of the reality show.

More Like This
Khloé Kardashian Has Welcomed Baby #2 Via Surrogate & Is Keeping The Name A Secret
Penelope Disick Transforms Brother Reign Into An Adorable Minion
10 Cozy, Romantic, & Drama-Filled Shows To Watch If You Love 'Virgin River'
'Virgin River' Fans Can't Stop Cracking Jokes About How Charmaine Is *Still* Pregnant