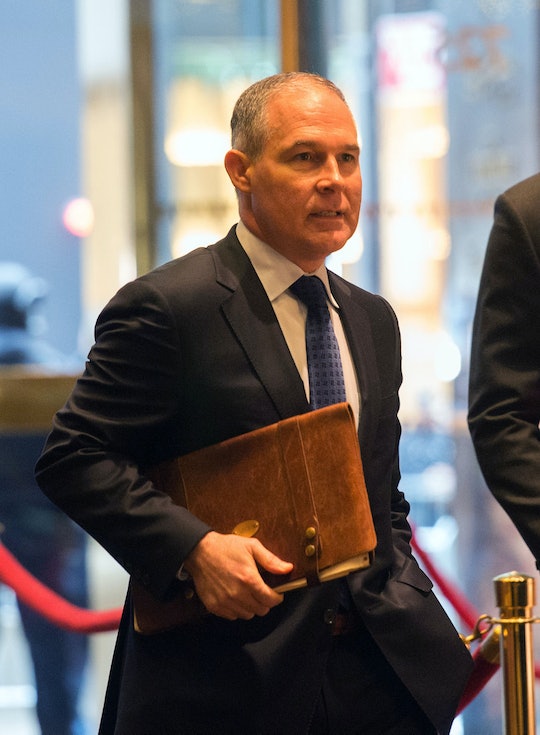 Who Is Scott Pruitt? Trump Is Reportedly Considering Him For A Big Position

The Trump transition team has been on a roll this week, naming some of the bigger seats on Trump's team and interviewing candidates to lead the various departments. On Wednesday, it was reported that Trump would pick Scott Pruitt as the EPA head, in yet another controversial move for the incoming administration. Pruitt is the current Oklahoma attorney general and, according to Politico, is one of climate change's "most hostile critics." More importantly, the head of the EPA isn't a Cabinet position, so if offered the job, Pruitt won't need congressional approval to take over.

When you hear people say that Pruitt is "hostile" towards environmental protection, it's not an exaggeration, no matter what side of the political aisle you tend to agree with. He's actively suing the EPA, the very agency he could be in charge of, over a few initiatives that began under the Obama administration. Pruitt is one of many state attorneys general that is specifically suing the EPA's Clean Power Plan, which is an initiative targeted at the electricity sector's reduction of greenhouse emissions. Pruitt has also sued the EPA over their regulations in the oil and gas sector that mandate reducing methane gas emissions.

That's why Pruitt is a controversial pick for head of the EPA. It's one thing to believe or disbelieve in climate change or to disagree about the level of responsibility that gas, electric, and oil industries have when it comes to the environment. Those are good conversations to have. It's another thing to try and shut down the conversation entirely.

Pruitt's history in office shows that he has already chosen a side and that the protection of the environment, the purpose (at least by name) of the agency, isn't really up for discussion. Voters knew that Trump wasn't particularly interested in the environment and that he didn't think climate change was a major issue. Expectations were already low for environmental activists, but a pick like Pruitt drives the point home that there won't be any room for compromise.

Pruitt has expressed a worry that the EPA inhibits business and has too much oversight. He said of the Clear Air Act that EPA officials "tend to have this approach that the end justifies the means … They tend to justify it by saying this big issue, this is an important issue.”

Trump agrees with him. On the campaign trail, Trump said that there was "tremendous cutting” that should be done to the agency since it wasn't "doing [its] job and was "making it impossible for our country to compete."

Pruitt not only shares Trump's views but has taken legal action agency. If anything, appointing Pruitt is the beginning of the conscious uncoupling of the EPA and any power it might have when it comes to federal oversight of corporations and their environmental impact.