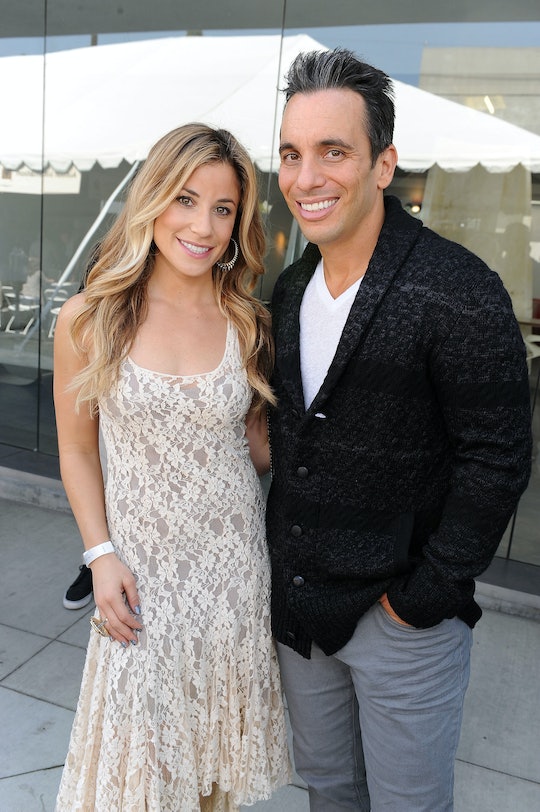 If you haven't heard of Sebastian Maniscalco, you certainly will after tonight. The comedian, perhaps best known for his Netflix special, Stay Hungry, will be on stage hosting MTV's Video Music Awards, or VMAs, this evening, Monday, Aug. 26. Even those who are very familiar with his career may be wondering who Sebastian Maniscalco's wife, Lana Gomez is, as she's often included in his comedy. Beyond being Maniscalco's other half, Gomez a very successful artist, designer, and mother of two adorable kids.

Gomez and Maniscalco tied the knot back in 2013, and they actually celebrated their sixth wedding anniversary last week, as she shared on Instagram. "6 amazing fun crazy years of marriage and we picked up 2 more munchkins along the way!!!" Gomez captioned a sweet family photo of herself, Maniscalco, and their daughter Serafina and their infant son Caruso in New York City.

The couple welcomed their first child, Serafina, back in 2017, who's partly named after Gomez's mother. As Maniscalco shared on Instagram following her birth, "Serafina was my grandmother's name, Simone is Lana’s mom, and Serafina Simone is our baby girl!" And earlier this summer, back in June, they welcomed their son, Caruso. "It’s been a busy week! Welcome to the world Caruso Jack Maniscalco!" Gomez shared on Instagram following his birth.

As for her successful professional life, Gomez is a talented painter and sculptor, who has had her work on display in art galleries, and has been featured in publications such as House Beautiful, InStyle, and The New Yorker, according to personal website. Gomez studied art at the University of Tennessee, she shared on her website, before moving to Los Angeles, where she currently resides with her sweet family.

In an interview with Australian Vogue, which profiled her own home's interior design, Gomez described her taste as "unexpected," before emphasizing that creating a beautiful house is just as much about who is in it as what is in it.

"A home is definitely about the people, but the design influences and inspires the feeling in the home," she told the magazine in March 2018. "I do think it’s a dance between the design and the people, because you can have a beautiful home and be horrible people and that comes through — you don’t want to hang out there."

When she's not making her art, parenting her two adorable children, designing her impeccable home, or traveling with her husband for his comedy work, she's documenting her work and sharing her life on Instagram, with her more than 44,000 followers. In fact, Gomez often shares glimpses of her paintings on Instagram. Back in December 2017, for instance, she shared a photo of one beautiful colorful painting she titled, "Dreamsicle," and said it's one of her favorites.

Gomez will certainly be happily applauding her husband from the wings this evening as he hosts the 2019 VMAs. And she won't be the only one he's got rooting for him: it seems that his kiddos are also pretty pumped for his big gig, as evidenced by an adorable photo Gomez shared on Instagram on Monday.

"Who is as excited as Serafina for the @vmas !? Caruso is a little too young to understand so he is napping!" Gomez captioned the photo.

It's clear Serafina and Caruso have some incredibly talented and creative parents. And while the 2019 VMAs will wrap tonight, this will hardly be the last we'll be hearing from this talented family.