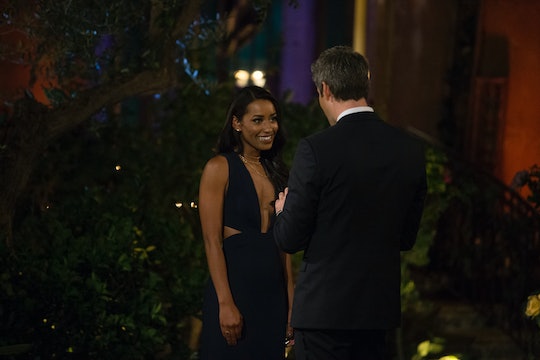 Seinne From 'The Bachelor' Has An Impressive Resume

The Bachelor returns this January, or, if you prefer ABC's dad jokes, this Janu-Arie, because the 22nd Bachelor is Arie Luyendyk, Jr., erstwhile race car driver and infamous kissing bandit. Vying for his affection are 29 women including no less than four Laurens and a handful of real estate industry professionals. One of those women is a Yale grad named Seinne Fleming, but who is Seinne on The Bachelor? She has a pretty impressive background, but one fun fact right off the bat is that she was named Miss Teen Long Beach 2007.

As Arie wrapped up his professional racing career, he pivoted to real estate in his hometown of Scottsdale, Arizona, passing his real estate exam in August of 2016. It's pretty obvious, given the number of contestants this season who also work in real estate, that producers hope women with some common professional ground will catch his eye. Seinne is currently an associate at Latitude Management Real Estate Investors in Los Angeles, where she works as a commercial real estate manager. Before that, she worked as a property manager at a different firm in Orange County and as a restaurant group manager. She did briefly work in TV as an HBO post-production intern for a summer during college, which may give her an edge when it comes to sensing how she'll be portrayed on the show.

At Yale, Seinne majored in economics and it looks like she did some study abroad in Portugal and Italy, too. She also performed with Yale's student-run dance company Yaledancers and the Yale Dramatic Association before graduating in 2012. While juggling all those activities, Seinne rounded out her college career as a member of the Yale Black Women's Coalition, so she seems like the perfect mix of ambitious, entertaining, and accomplished to win over Bachelor Nation. (And Arie, too, I guess.)

Chris Harrison, for one, agrees; he named the 27-year-old one of his Top 5 contenders of the season in an interview with People. "This girl is flat out impressive," he admitted. "She’s incredibly intelligent and she definitely has this zest for life that Arie is in awe of. He’s a little bit mesmerized by her."

We know from interviews he's done since the show wrapped that Arie falls in love with two women this season, and the likelihood seems really high that Seinne is one of them. In the promo, we're also led to believe that an ex-boyfriend of one of the final two women shows up in the finale to confess his love and get her back, obviously sending Arie into an emotional panic.

He, himself, was the runner-up on Emily Maynard's season of The Bachelorette, and he was completely devastated when he got dumped. He even flew to her hometown after the season wrapped and left his show journal on her doorstep to try and persuade her to reconsider their relationship. She admitted during her After the Final Rose special that she never read it, because she didn't think it would change her mind. Needless to say, she eventually broke up with the guy she wound up picking and sang Arie's praises when he was chosen as The Bachelor.

"I can’t think of a better person to be The Bachelor than Arie and I’ve been hoping this day would come since Season 8 ended!" Emily told Us Weekly in a statement. "He’s a gentleman through and through and all the girls on his season are lucky to have him."

You can see how well Seinne and Arie fair when The Bachelor premieres on ABC starting Monday, January 1 at 8 p.m. EST.