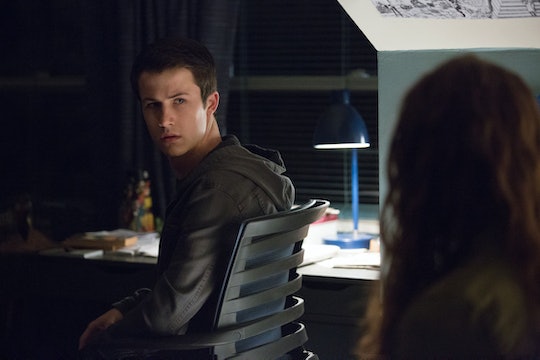 An all-new season of 13 Reasons Why is finally here and although last season ended with Tony giving Hannah's parents the tapes, it looks like there's even more secrets to be revealed. In the preview for the new season, someone's using a new method to get those secrets out. Instead of tapes, it's now Polaroids, but who is sending the Polaroids on 13 Reasons Why?

The show has officially gone off book for its second season, so no clues will be found in the original novel written by Jay Asher. According to the official synopsis for the season, "a series of ominous polaroids lead Clay and his classmates to uncover a sickening secret and a conspiracy to cover it up." So whoever's sending the photos knows this secret. One of the new characters this season, Nina, is described as a "well respected track star with a secret." Perhaps she's the one sending the photos and the two secrets are one and the same?

It's also possible it's any one of the other new characters being introduced this season. They include Chloe, the new head cheerleader at Liberty High, Cyrus, an "edgy, cynical mischief maker," and Mackenzie, Cyrus' sister. However, why any of these new students would want to get involved in this situation is anyone's guess.

Even so, it seems much more likely that the culprit behind the photos is someone new, since if it was one of the original characters, wouldn't this have come up earlier? Thus it seems someone else at Liberty High knows more about what exactly is going on at that high school, and it definitely seems tied to Bryce and the overall rape culture at Liberty.

In the trailer, Jessica is being targeted and slut shamed for her accusations against Bryce. Additionally, Bryce is seen telling what looks to be the other jocks that they're all in this together. Perhaps, just like Justin who stood by while Bryce raped his girlfriend, the other jocks also know very well what Bryce does and were perhaps a part of it sometimes as well.

This definitely seems to be true since one clip in the preview also shows Sheri looking very uncomfortable surrounded by a bunch of guys while one guy takes a photo with a Polaroid camera. Maybe all the photos on the Polaroids demonstrate what guys have been doing with girls at the school, and the photos are pictures they actually took themselves. If that's the case, it's very possible that it's a guy who now feels guilty about everything that's happened and decided to release the Polaroids in the hopes that someone else would reveal this major secret at the school.

However, if that's really the case, does sending out the Polaroids really relieve the person of whatever part they may have played in what goes on at Liberty High? Maybe that'll be something else that comes up during this season. While the first season was centered around what happened to Hannah and Jessica, it looks like this season will really focus on the rape culture at Liberty High as a whole. As one of the Polaroid states, "Hannah wasn't the only one," and now Clay, along with the rest of his peers, are going to have to really ask themselves what are they going to do about it?

It looks like someone's already taking action with the Polaroids and in the preview someone also wrote "Rapist" across Bryce's locker, but those things don't equate justice. So will Bryce, and everyone else who looked the other way at his actions, finally be held responsible for what they did? You'll just have to watch the new season of 13 Reasons Why to find out.