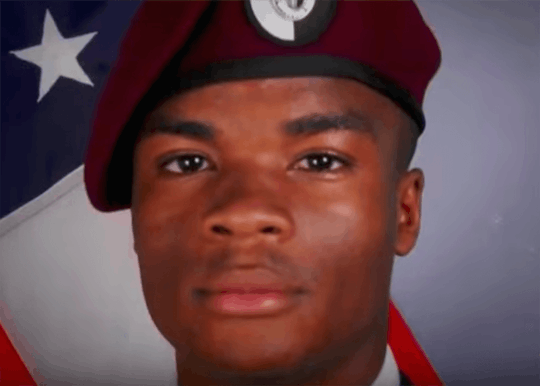 On Tuesday, reports surfaced about President Donald Trump's allegedly callous comments to the wife of slain U.S. Army soldier Sgt. La David Johnson when Trump called to speak to the Gold Star wife in the wake of her husband's death. Who is Sgt. La David Johnson? The 25-year-old from Miami Gardens, Florida, was one of four U.S. Army soldiers killed in Niger on Oct. 4 while on an advise-and-assist mission with Nigerian forces fighting radical Islamist militant group Boko Haram.

Johnson is survived by his wife, Myeshia, and their two children, a 6-year-old daughter and a 2-year-old son. According to the Sgt. La David T. Johnson Scholarship created on GoFundMe, Myeshia is currently pregnant with the couple's third child. According to the U.S. Army Registry of the American Soldier, Johnson was a decorated serviceman. During his three years in the U.S. Army, Johnson was awarded the Purple Heart, Army Commendation Medal, Army Achievement Medal, and the Parachutist Badge.

Johnson's death has sparked massive controversy, as, on Tuesday, Florida Rep. Frederica Wilson told CNN that Trump had finally called Johnson's widow — but his remarks were unnecessarily cruel. Wilson said she spoke to Myeshia, who told her that Trump allegedly told the grieving woman, "Well, I guess he knew what he signed up for, but I guess it still hurt."

On Wednesday, Trump denied Rep. Wilson's claim, tweeting, "Democrat Congresswoman totally fabricated what I said to the wife of a soldier who died in action (and I have proof). Sad!" So far, the president has yet to publicly produce any proof of his comments or conversation with Myeshia Johnson.

While Johnson's widow has not yet spoken publicly beyond a few Facebook posts grieving her husband, Rep. Wilson described what happened to CNN. Rep. Wilson was in the car with Johnson's family on Tuesday evening, as they arrived at Miami International Airport, where Johnson's remains arrived in a flag-draped casket from where he was killed in northwestern Africa. Video footage of Myeshia sobbing over her late husband's casket with her 6-year-old daughter at her side on the tarmac is pretty hard to watch.

Speaking to CNN's Don Lemon on Tuesday, Rep. Wilson said she heard all of Trump's phone call to Johnson's family as the phone was on speakerphone in the car. Wilson said Trump spoke with Myeshia for approximately 5 minutes over the phone in the car on their way to the airport, noting that Myeshia was "very distraught" following the call. Wilson's comments about what happened only paint a truly awful picture of the moments surrounding Trump's call to Johnson's widow.

This is a young, young woman who has two children — who is 6 months pregnant with her third child. She has just lost her husband. She was just told that he cannot have an open casket funeral — which gives her all kinds of nightmares how his body must look, his face must look — and this is what the President of the United States says to her?

Trump has faced sharp criticism in recent weeks for taking 12 days to even address the deaths of four soldiers in Niger, Johnson's included. On Monday, the president convened a spontaneous press conference at the White House Rose Garden where he defended having not yet publicly spoken about Johnson or his three fellow fallen soldiers, saying he wrote the soldiers' families letters.

And, because the president can't resist turning even something as apolitical as the death of a U.S. soldier into something about Obama, Trump claimed that he hadn't yet called the families of the fallen because "a lot of [former presidents] didn't make calls." This — like so many of Trump's claims — is a lie. The White House did not immediately respond to Romper's request for comment on this story.

Rep. Wilson is working with the Johnson family to create a memorial scholarship fund for his three children via GoFundMe. In the just over 24 hours since the campaign was created on GoFundMe, the Sgt. La David T. Johnson Scholarship fund has raised more than a quarter of its $1 million goal. The funds will be used to help put Johnson's three children through college.