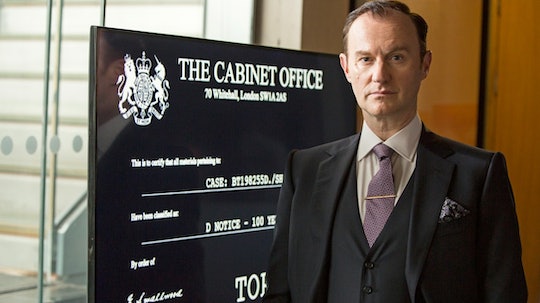 One of Sherlock Season 3's biggest reveals was Mycroft's allusion to the existence of a third, estranged Holmes sibling. Many fans wondered whether the tidbit would get unpacked during Season 4, and now that we're two-thirds of the way through it, we know that it does. Eurus Holmes was revealed as Sherlock and Mycroft's sister, which leaves fans with a big clue from showrunner Steven Moffat that has yet to be resolved. He'd previously teased the importance of Sherrinford, who was believed to be the third Holmes brother. So who is Sherrinford on Sherlock? There are a few different theories floating around.

First, Sherrinford has been established as a hypothesized eldest Holmes brother from the Sir Arthur Conan Doyle series. He first came up in Doyle's early notes on the stories as a proposed name for his leading detective before he eventually settled on Sherlock. William S. Baring-Gould, a Sherlock Holmes scholar, later wrote a fictional biography of Holmes, proposing Sherrinford as his and Mycroft's oldest brother. It's established in the original series that Holmes' family members were "country squires," which, at that time, meant that the oldest brother would have stayed on the family estate to run it. That explains why Sherlock and Mycroft are in London, but their third brother is off in the country. It also explains Mycroft's role as a senior civil servant, which would have been a logical position for a son of the gentry without an inheritance to take.

We know that "Thatcher" refers to the busts of Margaret Thatcher from the first episode of the season, "The Six Thatchers." "Smith" refers to Faith Smith, the woman Eurus posed as when she first met Sherlock in Episode 2. So the "Sherrinford" reference should presumably become clear in Episode 3.

Some fans speculate that there will actually be a fourth Holmes sibling named Sherrinford revealed, possibly played by Tom Hiddleston, who was first rumored to play the third brother. There's potentially a hint at this in the second episode, when Sherlock says, "Must be something comforting about the number three. Everyone always gives up after three." Perhaps there is a fourth sibling waiting in the wings after all.

But Vanity Fair theorizes another possibility that's actually quite genius: what if Sherrinford is not a person, but a place?

"So, where has Eurus been this whole time? The best guess there is that she’s been at a mental institution/high-security facility called 'Sherrinford.' Most fans assumed 'Sherrinford' was the name of a third Holmes brother, but if you pay close attention to the language Mycroft uses throughout, Sherrinford could easily be a place.

She goes on to explain the interaction that took place between Mycroft and Lady Smallwood when he assured her that Sherrinford is "secure." That could easily be a location rather than someone's actual name. Perhaps he doesn't like saying his sister's name out loud, so he chooses to refer to her by where she is being kept... or should I say, where she was being kept.

If Sherrinford really is some psychiatric facility that was supposed to be housing Eurus, it opens up amazing possibilities for her backstory. Then again, maybe Sherrinford is just some clever code name he uses for her and has nothing to do with where she's been all this time. On a show like this, anything is possible. You can tune into the season finale of Sherlock on Sunday, Jan 15.