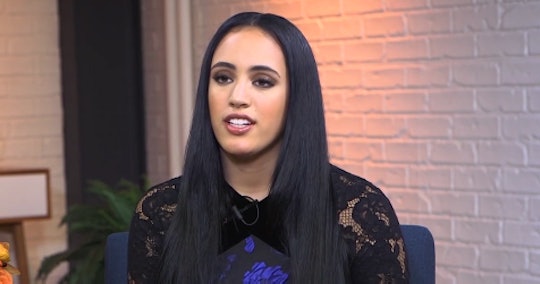 Who Is Simone Garcia Johnson? The Rock’s Daughter Is Making History At The 2018 Golden Globes

The 2018 Golden Globes air on Sunday at 8 p.m. Eastern Time, and one presenter in particular will make history when she takes the stage. Simone Garcia Johnson is the very first Golden Globes Ambassador, and she's just 16 years old. The daughter of Dwayne "The Rock" Johnson and Dany Garcia, Simone will hand out the golden statues during the ceremony, just as the former Mr. and Miss Golden Globes did, according to E! News. But the role actually symbolizes so much more than that.

In her role as Ambassador, Simone will also represent the Hollywood Foreign Press Association's philanthropic efforts for the rest of year. One of the first things Simone had to do as Golden Globe Ambassador was partner with a charity, according to Women's Wear Daily. And she picked GlobalGirl Media, an organization founded by a group of female filmmakers and journalists to give young women "the tools they need to become digital journalists," Women's Wear Daily reported.

And this is far from the first time Simone has been involved in activism. She also reportedly uses her platform of nearly 250,000 Instagram followers to bring attention to political and social issues. She's made posts in support of the Black Lives Matter movement, as well as Time's Up, which is an initiative backed by women in Hollywood "to fight systemic sexual harassment in the workplace," according to The Hollywood Reporter.

Previous honorees who formerly went by the title of Miss Golden Globe included Sophia, Sistine, and Scarlet Stallone, the daughters of actor Sylvester Stallone, according to USA Today. At this year's awards ceremony, Simone is the first person ever to go by the new title, and she is thrilled with the change. Simone told W Magazine:

I’m really glad they chose to make that change because it promotes equality and is more inclusive, and those are things that I’m passionate about. I feel like representing that is really going to open up a lot of doors—not only for me, but also for all the future Golden Globes Ambassadors.

Simone told E! News' Jamie Kennedy that getting the role was "surreal." She reportedly said:

My parents told me and we were all so excited and I'm really happy that the Hollywood Foreign Press chose to make this change because it's more inclusive and it promotes equality and I feel strongly about those things and I'm so happy to represent that title.

Clearly the position is in very good hands, because Simone isn't just going to take on the role for the fun of it. She cares deeply about the work that she's representing, and the tide change in Hollywood that the new presenter title represents.

When she's not advocating for change on social media or preparing to be a Golden Globes Ambassador, Simone is also an aspiring model, according to another W Magazine article. She doesn't currently seem to be pursuing acting like her dad — in fact, Simone's IMDb page only lists Entertainment Tonight and awards show appearances under filmography credits.

Whatever Simone decides to do after she completes the Golden Globes Ambassador gig, it's sure to be interesting. She's not even in college yet, and she's already doing amazing things. It will definitely be fascinating to watch what Simone does next.