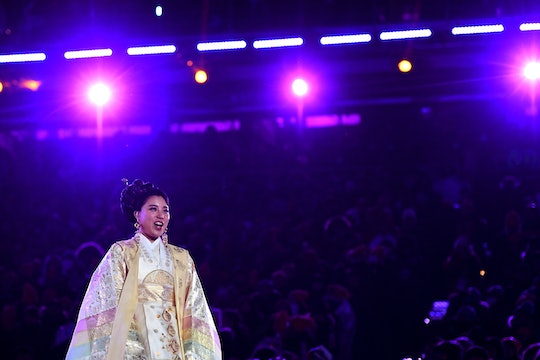 This Friday, February 9, the 2018 Winter Olympics will kick off in PyeongChang, South Korea. Sure, there’s the world-class athleticism and nail-biting competition, but let’s be honest — many of us will be tuning in for the opening ceremony and little else. Fortunately, South Korea gets this and has been preparing for this moment for seven years, seven years people! So who is singing the Olympic anthem and what do we need to know about it? Let's get into it.

The general flow of the opening ceremony will follow standard Olympic protocol, according to The Telegraph, beginning with the entry of head of state, followed by the parade of athletes, a symbolic release of pigeons, and the head of state declaring the games officially open. Then we get to the triumphant moment when the Olympic anthem is sung while the Olympic flag is raised. Powerhouse Korean opera singer Su-mi Hwang will perform the Olympic anthem this year. (For those hoping it would be BTS dropping the mic, don't worry, there will be plenty of other K-Pop performances during the opening ceremony, reported Billboard).

Each Olympic hosting country has a chance to shine a spotlight on their culture through their choice of anthem singer. At the 2016 Summer Olympic Games in Rio de Janeiro, more than 40 children from The More Project performed a heart-warming rendition of the anthem.

And at the 2014 Winter Olympic Games in Sochi, the Olympic anthem was sung by world-famous opera singer, Anna Netrebko.

The origin of the Olympic anthem, or hymn, dates all the way back to the first modern Olympic Games in 1896. Originally written by opera composer Spyridon Samaras, with lyrics by Greek poet Kostis Palamas, it was later declared the official Olympic anthem by the International Olympic Committee and has been performed at each Olympic Games' opening and closing ceremony since 1960, according to Wikipedia.

With all of the drama surrounding the neighboring country North Korea, and their role in the Olympic Games, the singing of the Olympic anthem at this year's Olympics — accompanied by the Olympic flag raising — promises to be a particularly poignant moment of international unity. Here are the first two stanzas of the English sung version of Olympic anthem, also courtesy of Wikipedia:

Whose beacon lights our way,

Emblaze our hearts with the fires of hope,

On this momentous day.

As now we come across the world,

Let all the flags of every land,

I must admit that the anthem's spirit of hope and unity gives me that warm and fuzzy feeling. And speaking of warm, one of the biggest concerns for the PyeongChang organizing committee is whether athletes and spectators alike are going to be able to stay warm during the opening ceremony. An estimated 35,000 fans are expected to pile into the Olympic stadium for the event, and, with the wind chill, it's only predicted to be 7 degrees Fahrenheit, according to Time.

In attempts to ward off hypothermia, spectators will receive six items to keep them warm: a raincoat, lap blanket, knit caps, a warm seat cushion and multiple hand and feet warmers, according to the official site of the Olympics. Workers are also busy installing wind shields at the stadium in an effort to make the opening ceremony more comfortable for those in attendance.

Fortunately, Team USA is going to be all set, thanks to their high-tech parkas courtesy of Ralph Lauren. The company's chief innovation officer, David Lauren, told USA Today, "This is a fabric with ink that heats up — it's weightless, it's conductive and it's immediate."

Now I just hope that all of the performers at the opening ceremony are equipped with some seriously warm duds, too.

More Like This
A First Look At The New Hess Collectible That's Probably Definitely Going To Sell Out
10 Super Bowl Party Games To Play While You Watch The Main Event
13 Is "Too Early" For Kids To Be On Social Media, Surgeon General Cautions
Michigan Right-Wing Group Wants To Erase LGBTQ+ Sex Ed
What Parents Are Talking About — Delivered Straight To Your Inbox