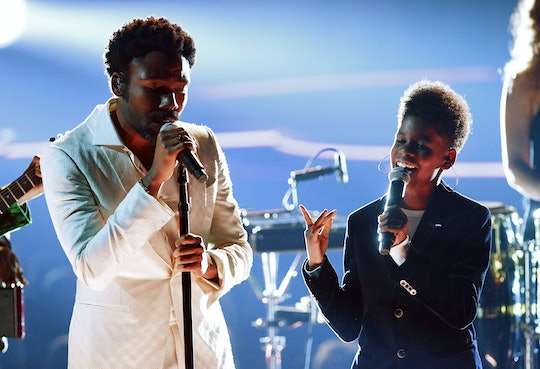 Holy live performances, 2018 Grammy Awards. OK, I get it: It's an awards show for singers and musicians. But seriously, are there more acts than award presentations at this point? Among the impressive lineup of performers was Childish Gambino. But who is singing with Childish Gambino at the Grammys? That would be JD McCrary. And get used to this guy because he's not going anywhere anytime soon.

Childish Gambino performed a spirited performance of "Terrified" during the Grammys, however, many viewers might not have recognized the younger singer who was performing alongside him. (I know I didn't.) After doing a little digging, it turns out this kid already has a lot going for him. For starters, 9-year-old McCrary — a singer, dancer, and actor — is starring as Young Simba in the upcoming live-action film The Lion King, reported Variety. Not to mention he acted on the Disney channel show “K.C. Undercover.” And did I mentioned that many have compared this talented singer to the likes of Michael Jackson. Michael freaking Jackson, guys!

In an interview with Ellen DeGeneres that aired on Jan. 12, the kid singer revealed he has been singing since he was in diapers. He also addressed the Michael Jackson comments. "Oh yeah, that's an honor," McCrary told DeGeneres. "I just feel like sometimes I mess up and I just feel like I need to do more work. But I really appreciate everybody that thinks that I'm at the level of Michael Jackson." Did I mention he's humble, too? What a sweetheart! Considering McCrary is also a huge fan of MJ, it must be an incredible honor to hear his own name used in the same sentence as the "Thriller" singer's name. After speaking with DeGeneres, McCrary fittingly performed the Jackson 5’s “Who’s Loving You." For the record, aside from his work with Childish Gambino and The Lion King, McCrary is also working on his own solo album, reported Vibe. (Just a reminder: This ridiculously talented kid isn't even 10 years old yet!)

Now that we've established who McCrary actually is, many Grammy viewers are likely wondering, "OK ... but why is he singing with Childish Gambino again?" Fair enough. As one Twitter user explained, "Childish Gambino is also Donald Glover who is playing Simba in the new Lion King and the young man that joined him on stage is JD McCrary who is playing young Simba!" So, wait. You're telling me that it was Simba and Simba who just sang on the Grammy Awards stage? Too cool. Apparently, McCrary also sang "Who's Loving You" for Glover in order to land the spot on "Terrified," reported Fader in 2016. “I guess [Glover] liked it so he invited me to a studio in Glendale, California. I never actually met him in person because he was in Europe, but he was on Skype the whole time I was there.”

In addition to establishing the identity of the talented kid-singer who performed with Childish Gambino/Donald Glover, Twitter users also shared their thoughts on his Grammys appearance. Among them? Ellen DeGeneres! " @JDMcCrary was just on my show and now he’s singing with Childish Gambino on the #GRAMMYs. Incredible," DeGeneres tweeted. Another Twitter user chimed in with, "In case y’all are still wondering about the kid.. @jdmccrary is uber talented! I suggest you watch his cover videos.. especially his New Edition ones!"

I don't know about you, but I'm pumped about the live-action Lion King. And now that I know a little more about the person who will be playing Young Simba, I want to see it even more. (Is it July 19, 2019 yet?) In the meantime, I invite you to check out McCrary's single "All of You," in the video, below. And seriously, be prepared to hear more of his name in the coming months — because I have a feeling this talented singer isn't going anywhere.