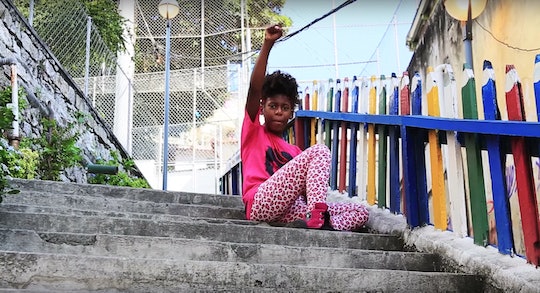 Who Is Soffia Corrêa, The 12-Year-Old Rapper Performing At The Rio Opening Ceremony?

The Rio Olympics officially kicked off on Friday, August 5 with an opening ceremony highlighting the many cultural contributions of Brazil. Among the most impressive was a performance from a young female MC. But who is Soffia Corrêa, the 12-year-old rapper performing at the Rio opening ceremony? Her song — and career — is dedicated to empowering black girls.

Born Soffia Gomes da Rocha Gregório Corrêa, but preferring the stage name "MC Soffia," The Telegraph noted that she has been rapping, and yes, penning her own rhymes, for six years. If you're wondering how a 6-year-old decides she's going to kick off a successful rap career, the story is — spoiler alert — unbelievably inspiring. As a kindergartener in Sao Paulo, Soffia was often made fun of by her classmates for her black skin. "So one day, I told my mom I wanted to be white," she told The Telegraph last year.

Her mom immediately jumped into action and began taking Soffia to hip hop shows in an effort to connect her with her roots and engender pride in her African heritage. Needless to say, it worked. The song Soffia performed at the opening ceremonies is called "Menina Pretinha," which translates to "Nightshade Girl," and is an ode to black girlhood. “I’m black and I’m proud of my color," her lyrics translate to. "My hair is dope, it doesn’t need a flat iron.”

Soffia's music pulls back the curtains on Brazil's history of slavery and the subsequent anti-black racism that still persists. She also tackles the sexism and misogyny still rife in Brazil. Another track of hers, called "Africa," honors famous black Brazilian women like Chica de Silva, known as "the slave who became a queen," and author Carolina Maria de Jesus.

At the opening ceremonies, Soffia got to perform with Karol Conká, a prominent Brazilian female rapper almost two decades her senior, whom Twitter informs us is basically the country's Beyoncé.

And, by the way, they looked like they had an incredible time doing it.

"Young people living in the peripheries of Brazil have a really hard time," Soffia, who lives in a social housing project in Sao Paulo, told MailOnline. "They are looked down by everyone. And if you are black and a girl it's even worse."

Thankfully, MC Soffia prides herself on offering an alternative to black girls who want to change — by reminding them of how much power they hold being themselves.