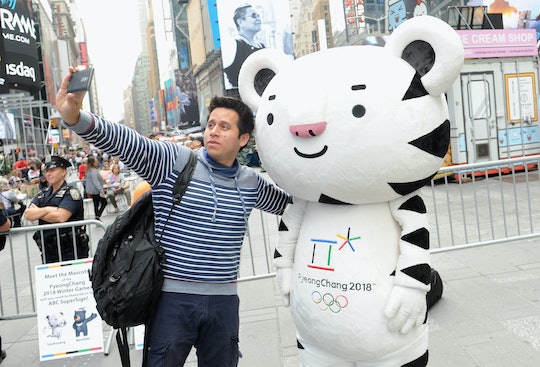 Everything You Need To Know About Soohorang, The Mascot Of The 2018 Winter Olympics

If you're as non-observant as I am, then you've probably never even noticed that there's an official mascot for every year the Olympic games are held. But guys, I'm here to tell you that it's totally a thing. And if you think about it, it makes perfect sense. After all, most other major sporting events include people dressed up and dancing around in giant, often furry costumes — so why not at the Olympics? With the 2018 Winter Olympics in PyeongChang, South Korea just around the corner, I thought it was about time to get up to speed on my mascot knowledge. But who is Soohorang? The 2018 Winter Olympics mascot is a symbol of protection.

Well, it turns out Soohorang is a seriously adorable white tiger that makes you want to run up and give it a hug. According to the Olympics website, the white tiger has traditionally been considered Korea's guardian animal. And apparently, the word "Sooho" means "protection" in Korean. So this year's mascot symbolized the protection offered to athletes, spectators, and everyone else taking part in the games, according to the website. The last part of the white tiger's name, "Rang" is derived from the middle letter of "Ho-rang-i," which is the Korean word for "tiger." Put it all together, and you literally have "protection tiger." Makes sense to me.

"It's a beautiful animal, strongly associated with Korean culture," Gunilla Lindberg, Chair of the IOC Coordination Commission for the 2018 Winter Olympic Games, said about Soohorang, according to PopSugar. "It also symbolizes the close link between the Olympic Winter Games and the natural environment. I'm sure the new mascot will be very popular with Koreans and people around the world."

If you're wondering if the black bear — which is commonly found alongside its white tiger buddy — is also a mascot for the 2018 Winter Olympics, the answer is no. Technically, that is. This Asiatic black bear, which symbolizes strong will and courage — is named Bandabi, and it's actually the mascot for the 2018 Paralympics, as Metro reported.

Sure, all of this is interesting for the sake of useless Olympics trivia. However, you're probably sitting there thinking, "OK, cool ... But why?" Fair enough. As Metro reported, they are mostly for symbolism's sake, meaning they don't have an actual "job" or physical purpose. You know, aside from being the perfect companions for selfies if you happen to be watching the Olympics in person. (And if you are, I'm jealous.) As the Olympics website explained, mascots "give concrete form to the Olympic spirit, promote the culture of the host city, and give the event a festive atmosphere."

I may be biased, considering I used to be obsessed with white tigers as a child, but I think Soohorang is the best Olympics mascot yet. Don't believe me? Take a look at some of the other ones throughout the years.

In my opinion, the mascot for the 2016 Summer Olympics in Rio was a close second. This adorable little guy was named Vinicius, according to the Olympics website. And for the 2014 Winter Olympics in Sochi, Russia, there was one, but three official mascots: the hare, the polar bear, and the leopard. Having three mascots was supposed to stand for the three places on the Olympic podium. (But I suspect is was code for, "We seriously couldn't make a decision.")

To be completely honest, people in animal costumes really freak me out. (I'm looking at you, Chuck E. Cheese.) With that said, I would totally consider giving Soohorang a hug if I were lucky enough to attend this year's Olympics. Because this mascot is just too cute. Since that won't be happening, I guess I'll have to be OK with simply "awww"-ing from my couch instead.