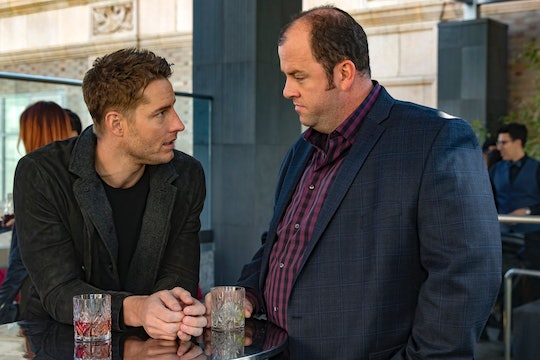 'This Is Us' Introduces A Woman From Kevin's Past

If I'm being completely honest, I've never felt very invested in Kevin's love life. Maybe it's because couples like Rebecca and Jack and Toby and Kate tend to steal the spotlight, but for whatever reason, I've just never really cared about Kevin's romantic entanglements. However, Tuesday night's episode came with an interesting twist when Kevin's ex-wife, Sophie, was introduced on This Is Us. So who is this woman and why have we never heard of her before? It turns out that we actually have.

Sure, it's surprising to discover that Kevin used to be married 12 years ago, but this wasn't just some fling that he took too far. This is a person who has been in his life since childhood. In fact, she just so happens to be Kate's best friend. After having a heart-to-heart with Toby, who tells him to think of three sentences to win the love of his life back and narrow down who it is he's talking to, Kevin chose not to show up at Olivia's doorstep or Sloan's doorstep. Instead he knocked on the door of his ex-wife, revealing how much he still loves her even after all this time. Which is a very Jack thing to do, by the way. He really is his father's son.

That by itself is pretty sweet, however, it's made even sweeter thanks in large part to the flashbacks of the triplets' tenth birthday parties. Each of them wanted a different theme and Kevin selected his to be centered around The Princess Bride, not because he loves the movie, but because the girl that he's interested in loves the movie. And that girl just so happens to be Sophie. That's right, my friends. Kevin planned his birthday theme in order to make the girl that he loved happy.

It's basically one of the most adorable childhood love stories every and you have my permission to gush at the scene for hours on end because it is just that cute. And while it's unknown how their relationship is going to pan out in the present day, the fact that they share so much history and affection for each other even after all this time proves that their may be hope for them yet. We'll just have to wait and see how this love story plays out, for better or for worse.