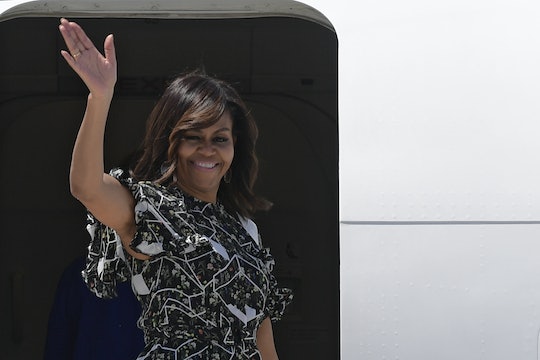 Who Is Speaking At The Democratic National Convention? It Is Quite A Lineup

It's no surprise that some of the biggest names in the Democratic Party are slated to take the stage to ring in the official nomination of presumptive presidential candidate Hillary Clinton. So, who is speaking at the Democratic National Convention? The star-studded list includes President Barack Obama, first lady Michelle Obama, Vermont Sen. Bernie Sanders, former President Bill Clinton, and Massachusetts Sen. Elizabeth Warren.

Clinton’s campaign slogan is “Stronger Together,” so it's important that she has a range of people — politicians, citizens, personalities — speaking no her behalf, according to Mic.com. The Democratic Convention will not only be an opportunity to solidify the party's platform and goals; it will also be an opportunity to portray Clinton as an experienced, empathetic, accomplished stateswoman to an audience whose support ranges from fanatical to skeptical.

Like the Republican National Convention, every day will have a different theme. Monday night will be organized around the theme "United Together," and it will focus on the strengths of the country's diversity and the importance of the American family. Sanders, Michelle Obama and the immigration activist Astrid Silva are scheduled to address the crowd, according to USA Today. Sanders' appearance on this day gives the phrase special meaning. He, a former rival, will no doubt urge his fans and the Democratic Party in general to come together to win the election.

Tuesday will focus on “A Lifetime of Fighting for Children and Families,” and the night's proceedings will honor Clinton's long history of child advocacy. Her husband, Bill Clinton, will speak, as well as The Mothers of the Movement, according to the Huffington Post. This extraordinary group of women are those that have lost children to gun violence, including police shootings. They include Eric Garner's mother, Trayvon Martin's mother, and Sandra Bland's mother, among others. On this night, the Democrats will also hold their roll call vote whereby states will pledge delegates to Clinton or Sanders.

On Wednesday, Obama and Biden will give speeches about Clinton as a colleague and politician. The night's theme is "Working Together" and hopes to focus on her accomplishments, according to Politico. Obama will no doubt discuss working with her during her tenure as Secretary of State, as well as running against her in his first presidential campaign.

Finally, Clinton will address the crowd on Thursday evening. She'll lay out her vision for the future and clarify her policy platform and presidential priorities. She'll be joined on stage that night by her daughter, Chelsea Clinton.

While those are the big names in politics, there are a number of other speakers set to address the convention who have not yet been announced, including her yet-to-be-named running mate. According to ABC News, Lady Gaga, Lenny Kravitz, and George Takei, among other stars, are rumored to be on the list of attendees. The Democratic Convention will be held this year in Pennsylvania July 25-28.