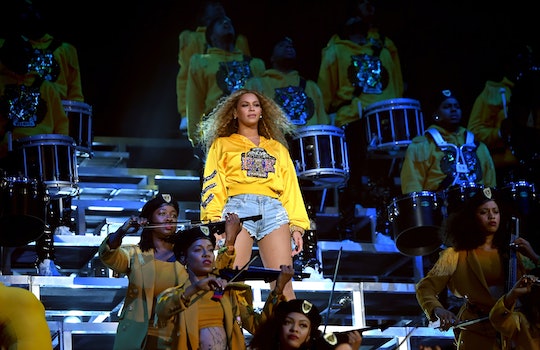 The Voice In The 'Homecoming: A Film By Beyonce' Trailer Might Be Very Familiar

There's a lot to look forward to in the trailer for Beyoncé's new concert documentary Homecoming. It captures the entirety of her Coachella 2018 performance, as well as all of the work that went into it. But the trailer doesn't feature any of Beyoncé's music, or even her speaking. The narration is someone else. But who is speaking in the Homecoming: A Film by Beyoncé trailer?

More Like This
What To Stream Right Now For Kids Who Love History
Here Are 25 Shows You Can Feel Good About Your 2-Year-Old Watching
Everything You Need To Know About The Rugrats Reboot
Exclusive: Cookie Monster Puppeteer Tells Us Why Kids Will Love His New Show Donkey Hodie

The voice narrating the trailer appears to be Maya Angelou's, taken from a past interview. Laid over shots of Beyoncé and her dancers preparing for Coachella, Angelou says that what she really wants is to be "a representative of my race, the human race." She goes on to say that she has "a chance to show how kind we can be, how intelligent and generous we can be. I have a chance to teach and to love and to laugh."

Then Angelou continues, "I know that when I've finished doing what I'm sent here to do, I will be called home. And I will go home without any fear. Trepidation, some, wondering what's going to happen."

At that point, the interviewer interjects to ask what advice Angelou has for this generation. She answers that they should tell the truth — to themselves first, then to the children. Angelou's words may have had some influence in Beyoncé titling the documentary Homecoming, as well as in her larger artistic vision for the show. Perhaps that will be expanded on when Homecoming premieres on Netflix on Apr. 17.

But where exactly is the audio clip from? Thankfully, Oprah Magazine was able to track down the source. Angelou's words were taken from a 2013 appearance on the Canadian show George Stroumboulopoulos Tonight. It was one of her final sit-down talks before her death in 2014. The full interview can be found on YouTube. Stroumboulopoulos visited Angelou in her home, where they discussed her long and varied career, as well as her philosophies on life. The segment used in the Homecoming trailer is just a brief snippet of the 13-minute interview.

This isn't the first time Beyoncé has incorporated the words of people she admires into her own work. Perhaps most famously, she sampled Nigerian writer Chimamanda Ngozi Adichie on the song "***Flawless." This not only gives fans insight into what's influencing Beyoncé and her music, but perhaps also introduces these famous and influential figures to people who might not be as familiar with them.

The idea of coming home may have been sparked by Angelou, but Homecoming seems to have many meanings. Elle UK noted the Coachella performance's collegiate aesthetic, which included university-style fashion and a marching band. The college vibe extended to the branding for Homecoming as well; the font used in teasers and on merchandise is similar to Greek lettering used by sororities. That ties into Angelou's words about teaching as well. She wanted to pass on what she learned throughout her lifetime, and now Beyoncé is doing the same by passing Angelou's words onto her fans.