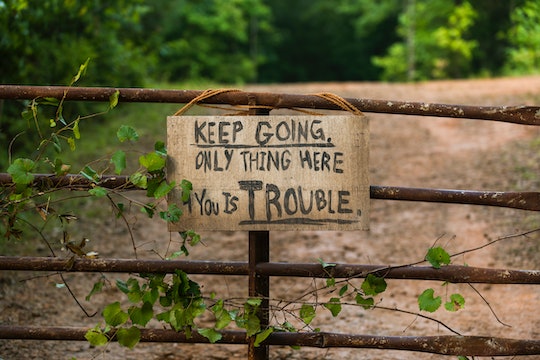 Who Is Spying On Alexandria On 'The Walking Dead'? There's No Way To Know

The midseason finale of The Walking Dead was all about putting the pieces into place for the rest of Season 7, but it posed as many questions as it answered. Many storylines were resolved, like Daryl escaping the Saviors' compound and Rick finding the energy to finally strike back against Negan after everything he did. However, the show also raised a mystery that ended things on an uneasy note. A few times in the episode, a person was clearly following the Alexandrians, but the only thing that was shown of them was their shoes. So who is spying on Alexandria on The Walking Dead?

It's not a fun answer, but there's really no way to know. The person's only identifying factor was a pair of pretty distinct boots, but that was it. There are a few possibilities but with so little to go off of, any theory is plausible; it's easier to rule everything in when you have no idea what's going on. In a plot carrying over from last week's "Sing Me a Song," Aaron and Rick were scavenging for supplies in a camp heavily plastered with all kinds of dire warnings. Could the person following them have been the owner of the floating houseboat that Rick and Aaron were stealing from? Or was the spy the first hint of a larger upcoming threat?

Many fans of the comics have been awaiting the introduction of the Whisperers, who are the current threat being dealt with in the comic series. The Whisperers have a huge army and they coat themselves in zombie guts so that they can pass through the world unbothered. Their leader is the violent Alpha, a cruel and callous woman who impales the heads of her victims on spikes, medieval-style. The spy could very well be Alpha scoping out the territory; there's no reason why the spy can't be a woman. However, it could also be Beta, Alpha's second in command.

Or it could be neither of them! It could be someone from another community trying to get a sense of Alexandria. Maybe it's someone from the Kingdom trying to make contact to broker a deal, as Richard tried to do when he met with Carol and Morgan. As Darth Macho pointed out on Twitter, it could be someone from the isolated community Oceanside, too; perhaps Cyndie, the girl who was so eager to help Tara. Maybe it was even Dwight, seeking an alliance behind Negan's back. That is something he did in the comics, though he met with Rick, Jesus, and Ezekiel in the Kingdom, not Alexandria.

Unfortunately, fans are going to have to wait until February to find out.