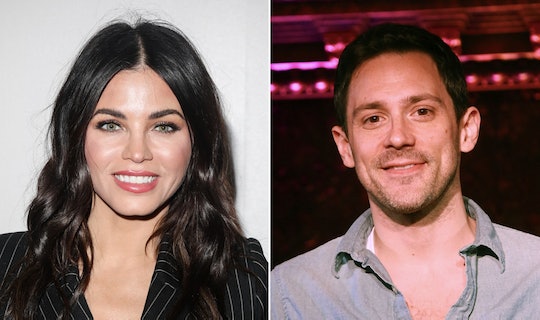 After news broke that they're expecting their first child together, all eyes are on Jenna Dewan's new relationship. Despite being a star in his own right, some may not be as familiar with the new father-to-be. So, who is Steve Kazee? Dewan's boyfriend is a talented, award-winning actor who is best known for his roles in Broadway shows and a few primetime TV shows.

Dewan and Kazee have been dating since early last year, according to People, but their relationship wasn't made public until the end of 2018. However, this isn't Kazee's first foray into the limelight. According to Harper's Bazaar, he starred in the Broadway musical Once as an Irish guitarist. He had previously been seen in shows like Spamalot and To Be or Not to Be, and was in Pretty Woman: The Musical in Chicago. In addition, he won a Tony in 2012 for Best Performance by a Leading Actor for the musical Once on Broadway, according to the Los Angeles Times, and has also won a Grammy for his work on the soundtrack.

Now Kazee is about to take on his greatest role ever: Dad. Today, Kazee and Dewan announced that they are expecting their first child together in a statement to People. “We are beyond overjoyed and couldn’t be happier to be expanding our family!” the couple told the magazine on Tuesday.

Kazee has also been seen in a variety of TV shows, according to Harper's Bazaar, including Shameless, Nashville, Legends, NCIS, and CSI. However, one of his best known cameos might have been in the cult-hit favorite film Twilight, in which he collaborated with Christina Perri for the song "A Thousand Years," which was on the soundtrack of Twilight: Breaking Dawn Part 2, according to ELLE.

Kazee is also an avid wrestling fan, as Dewan revealed on an episode of The Ellen Show. She explained to DeGeneres that Kazee has totally hooked her on the sport. "I watched WrestleMania by myself," Dewan said. "He wasn’t even in town and I watched WrestleMania. Because I had to know if Becky Lynch was going to beat Ronda Rousey! ... I was by myself, I ordered it, and I was sitting there texting [Steve] like, ‘Do you know what’s happening?’ I had to! I had to know! I was hooked!"

Though we know a lot about his professional life and interests, it's clear that Kazee is also a really good person at heart. In fact, in his 2012 acceptance speech when he receivded a Tony Award, he commended his late mother and said he "feels [her] here" with him. "My mother always told me before shows to stand up there and show ‘em whose little boy you are," he said. "And I’m showing you today that I am the son of Kathy Withrow Kazee who lost the fight with cancer on Easter Sunday this year. And I miss you every day, and I feel you here with me today, and I love you all so much, and thank you for this award."

And thanks to his Instagram, we also know that he's a great dog dad already, and that he really loves Dewan. Back in December, when Dewan turned 38, Kazee posted a photo of them in a photobooth and shared: “Happy Birthday Jenna! Somehow it feels like my birthday over and over again because I keep getting the gift of you every day."

It's clear that Dewan has truly met her perfect match, and fans are undoubtedly looking forward to seeing this little family continue to grow together.