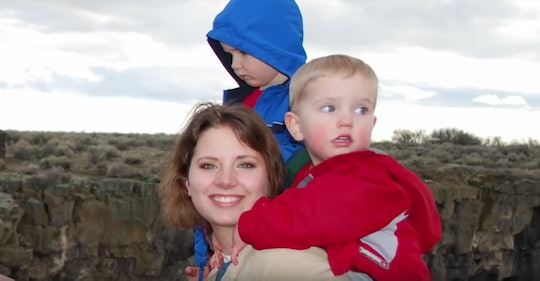 Oxygen is taking on one of the highest profile missing person's cases of the past decade — largely made infamous by the horrific tragedy that followed. But viewers unfamiliar with the story may be wondering who Susan Cox Powell was. Even if you don't recognize her by name, you probably remember hearing bits and pieces of the harrowing case. The Disappearance of Susan Cox Powell is a four-part docuseries Oxygen is airing over the course of two nights, promising "alarming new developments, scandalous never-before-seen videos, and rare interviews with family members offering a closer than ever look at one of the most shocking cases in recent memory."

In 2009, Susan, a then-28-year-old mom of two living in West Valley City, Utah disappeared while her husband, Josh Powell, claimed to be out camping with their 2 and 4-year-old sons. As the trailer notes, Josh's alibi immediately drew suspicion, because he claimed to take the kids out shortly after midnight in the middle of winter, leaving his sleeping wife at home. Soon, video footage and a secret will from Susan surfaced, in which she claimed, "I want it documented that there is extreme turmoil in our marriage," and, "If I die, it may not be an accident, even if it looks like one," according to ABC News.

Over the course of the next three years, investigations into Susan's disappearance focused on Josh as a person of interest, according to the Salt Lake City Tribune, as well as his father Steven, who had apparently developed a sexual obsession with her, per Oxygen. In late 2011, a court-ordered evaluation concluded that Josh should lose primary custody of his children, instead recommending supervised visits with a social worker several times a week, according to Time.

On Feb. 5, 2012, ABC News reports that a social worker named Elizabeth Griffin-Hall drove the two children, Charlie and Braden, to a supervised visit at Josh's home in Graham, Washington. According to Griffin-Hall, Josh told the boys he had a "big surprise" for them, which prompted them to run ahead and reach the front door before she did. She says Josh grabbed the children inside and locked the door, leaving her outside. According to police, he then attacked the boys with a hatchet, before an explosion engulfed the house in flames. Subsequent investigations found that the boys were critically wounded but survived the initial hatchet attack, only to die in the explosion, along with Josh. Susan's body has never been found.

One of the biggest stories to come out of the heartbreaking case was the poorly handled phone call Griffin-Hall placed to 911. The excruciating audio reveals her pleading with a dispatcher for several minutes, only to be told her call was considered non-emergent. Susan Cox's family has subsequently "sued Washington’s Department of Social and Health Services over the boys’ deaths, alleging the state did not take adequate measures to protect the boys," according to Salt Lake City's local Fox affiliate. The Disappearance Of Susan Cox Powell, which aims, among other things, to shed light on the consequences of underestimating intimate partner violence, airs May 4 and 5 on Oxygen.