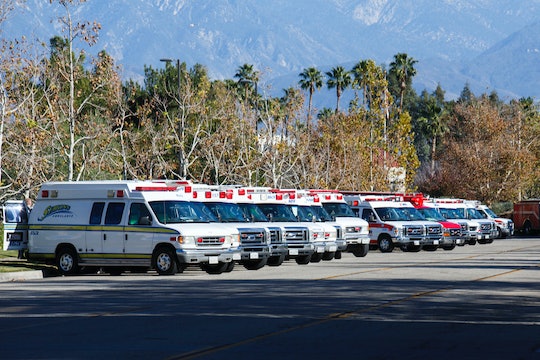 On Wednesday, at least three gunmen stormed a San Bernardino, California facility for people with developmental disabilities, killing at least 14 and injuring at least 21 more. And though there was a lot of confusion about why anyone would commit such an atrocity at the Inland Regional Center, we finally have some clarity about the situation — Syed R. Farook was named as one of the suspects who was killed by police, according to the L.A. Times. But who is Syed R. Farook?

Little information is currently available about Farook, but, according to the L.A. Times, Farook is a U.S. citizen. Also, according to CNN, Farook had worked as an environmental health specialist for the San Bernardino County health department for five years. Also, a dating profile purportedly belonging to Farook claimed he enjoys "target practice." It is unclear whether or not he has a history of crime.

Said a former co-worker of Farooq's:

I would say hi and bye. But we never engaged him in conversation. He didn't say much at all.

As for a possible motive for the shooting? Officials are still unsure, but police have said there was a dispute at a holiday party held at the Inland Regional Center shortly before the shooting. Sources tell CNN that Farook indeed leave angrily from the party before the shooting occurred.

Following the shooting, a shoot-out occurred between police and what was believed to be the black SUV that the shooters fled in following the tragedy. Officials confirmed that two suspects were killed in the shoot-out. In a press conference late Wednesday, police confirmed that Farook was one of those killed. The other suspect killed was Tashfeen Malik, a woman who San Bernardino Police Chief Jarrod Burguan said was in a relationship with Farook. According to reports, Farooq has been married two years, but it's unclear as to whether or not Malik is his wife. Reports, however, claim the Farooq was the father to a 6-month-old baby who was left with his grandmother on Wednesday.