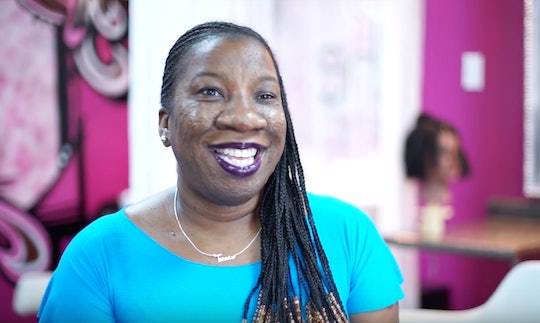 Tarana Burke Started The #MeToo Movement Almost A Decade Ago

If you've been on social media at all in the past few days, you've likely seen at least one or two posts that simply read, "Me too." You've probably also caught onto the fact that the posts have been shared as a message of solidarity, helping victims of sexual harassment or assault feel seen and helping others realize the sheer magnitude of the problem. And while actress Alyssa Milano has widely been credited with kickstarting the online trend this week, the true credit for the movement lies with activist Tarana Burke, who started the #MeToo movement a decade ago.

Burke — a longtime activist and nonprofit consultant — has been working with young people for more than 25 years now, and during that time, she's worked with many young women struggling to come to terms with their own experiences of harassment and assault. As someone who had survived sexual violence herself, she realized how healing it was to simply have someone stand with her — to empathize with her — and it helped her launch the Me Too movement.

"'Me Too' is so powerful, because somebody had said it to me ... and it changed the trajectory of my healing process," Burke told Democracy Now on Tuesday.

The rape crisis centers where Burke was working in 2007 didn't do much outreach work, which spurred Burke to bring Me Too out into the communities where she worked. "People are not going to seek it out," she told Democracy Now. She continued:

It's an approach that Burke calls "empowerment through empathy" — and it's one that she and others have been using for years in an attempt to fight survivors' feelings of shame. And clearly, it's a tactic that works, because once you look online and realize that nearly every woman you know has been through similar experiences, it becomes much easier to let go of shame, self-doubt, and guilt. I've watched the effect it has had in the communities of women I'm part of online, and it's sparked myriad conversations with friends.

The Me Too movement, for so many of the women I know, has become a powerful way to express support for one another, to encourage progress in society and healing in one another. As psychologist Joyce Marter wrote for Psych Central:

This type of campaign can bring about important awareness of real issues that are often buried in shame, fear and secrecy yet privately haunt all too many who have been impacted. Breaking the silence is an important part of stopping the cycle of abuse and a campaign like this bravely brings voice to the power of social media.

For many, it may feel like the Me Too movement is coming to a natural close, as women have shared both their stories and actionable steps for men who want to bring about change. But for Burke, the sharing of survivors' stories is only the beginning. Speaking to Democracy Now, Burke said:

If you applied the numbers around sexual violence to any communicable disease, the World Health Organization would shut it down. ... It is that pervasive. And so, we need to stop thinking about it in spurts, and think about it as something that we need to constantly work on.

So what's next after this surge of support online? Here are a few steps you can take to carry on with the Me Too movement:

With a little help from everyone who has shared or read a #MeToo story, we can keep the movement going long after women's stories have disappeared from social media feeds.