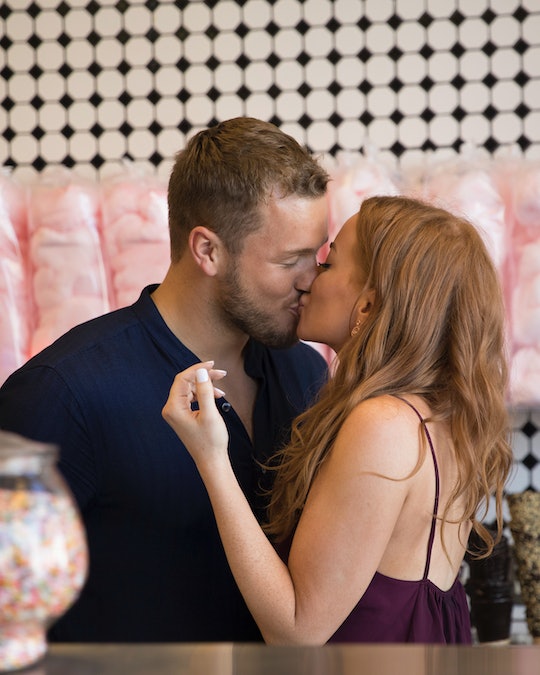 This Singer & Songwriter On 'The Bachelor' Is *Definitely* One To Watch

If you've watched The Bachelor long enough, you know you can count on at least three things happening through the course of the season: there will be a strange first introduction (sharks, sloths, oh my!), there will be a villain (because, TV), and at least one date will feature a musician or band. Sometimes it's someone fairly well known, but others, you get a glimpse of a new-ish artist trying to break out. Such is the case with the latest Canadian-born singer-songwriter, Tenille Arts. In case you haven't heard of her, who is Tenille Arts? One heck of a talent — that's who.

In the not-so-distant past, Tenille made her national TV debut performing on an episode of The Bachelor which subsequently landed her a record deal with Reviver and another shot at showcasing her talent on Season 23 to Colton (and whomever is lucky enough to go on this date with him). The episode is set to air on Monday, Jan. 21 at 8 p.m. ET on ABC. Expect Tenille — named one of Rolling Stone's "10 New Country Artists You Need to Know" — to serenade the "love" bugs with her current single, "I Hate This," which talks about broken relationships. "I’m so excited to be on The Bachelor again!" she said. "It’s an honor to have the opportunity to perform my music for such a huge audience."

At just 24-years-old, the Weyburn, Saskatchewan native has been a pro at playing guitar for over a decade, and has performed across the US and Canada through the same amount of time. Now that she's in Nashville, Tenille's promoting her work through a radio tour, which has been the product of over six million streams, a #1 iTunes Country Almbum Chart spot, and more. Her full length album, Rebel Child made it to the second spot via the iTunes Canada Country Album Chart and it's been largely because of that first performance on The Bachelor where she was officially "discovered."

Though Tenille only has around 3k followers on Twitter, I'm willing to bet the next Bachelor cameo will push those numbers into the double digits. Years ago, when she first tried to make it big, Tenille posted a cover of Taylor Swift's "Fifteen" on YouTube which garnered the attention of a Nashville manager. It didn't work out then, so she returned back to Canada to hone her craft — ultimately landing a deal in 2015 with Noble Vision Music Group in, you guessed it, Nashville. "Moving to Nashville was one of the best career moves I could have made," she said. "I have fully immersed myself into the country music scene, and I'm collaborating with new people every day. I used to write whenever I felt the inspiration, but now I'm writing almost every day and the progress has been rewarding." She admitted she needed that time to figure out her "sound," and it looks like she was right. Actually, there's even a Bachelor connection to Colton as Tenille is an official ambassador for Cystic Fibrosis and released the single, "Breathe," to benefit the illness. According to the ABC website, 100 percent of the proceeds went to CF Canada and the song "peaked at #6 on the iTunes Canada Country chart."

With all of that talent at such a young age, Tenille is just getting started. It doesn't matter if you missed her first appearance on The Bachelor, because you've been given the gift of a do-over for Season 23. If you miss it again, I can't help you; no one can.

The Bachelor airs Monday nights at 8 p.m. ET on ABC.