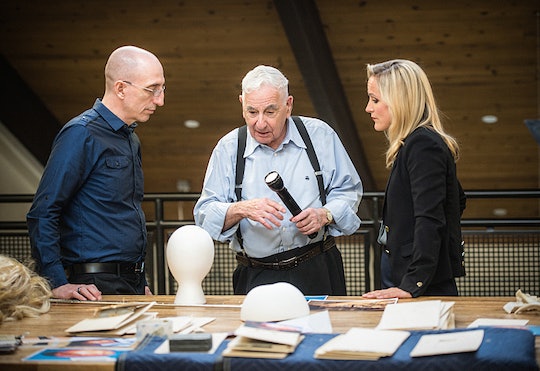 Who Is The 10-Year-Old In ‘The Case Of: JonBenet Ramsey’ Flashlight Experiment?

With the unsolved murder of 6-year-old JonBenét Ramsey approaching its 20th anniversary, the CBS mini-series The Case Of: JonBenét Ramsey dives back into the evidence one more, as it has been countless times over the past 20 years. On Sunday night, the first half of the mini-series aired, introducing a team of seven investigators who are reexamining the case using advance forensic techniques previously unavailable at the time of Ramsey's murder. This included an experiment to recreate the possibility that Ramsey died as a result of blunt force trauma to her head. "We thought it would be a good idea to bring in a child who is about 10 years old," former FBI profiler Jim Clemente said on screen. And... they totally did. So, who is the 10-year-old boy in The Case Of: JonBenét Ramsey flashlight experiment?

Well, once the credits rolled, they didn't tell us much, and cast listings at sites like IMDb and TV Guide don't provide viewers with any other clues, either. The show's producers did not immediately return Romper's request for information on the cast list either, but while his credentials aren't immediately listed, it's a safe assumption that the boy likely knows one of the investigators, is related to someone associated with the show, or was hired on for a one-time job. Either way, he does his job well, and social media is talking.

The scene is pretty jarring, I have to admit. The investigators re-created an approximation of Ramsey's own head with a skull covered in pig skin — and a blonde wig, because that was totally necessary — and then invited an otherwise spunky-looking 10-year-old child to then bash in the faux skull with a flashlight.

I was particularly a fan of investigator Laura Richards' instructions to the unknown boy: "We're going to ask you to strike the skull... round about there," she said, as she pointed to a spot on the dummy head. He certainly took direction well because that kid came down like a beast on that skull. And just as quickly as the boy appeared on screen, he faded back into the shadows of the set, leaving us all to wonder just how he will list this credit on his acting resumé after this. I'm no casting agent, but I think "Flashlight Boy" should suffice.

Part two of The Case Of: JonBenét Ramsey will air on Monday, Sept. 19 at 9 P.M. Eastern on CBS — and we'll all have to wait until then to see if Flashlight Boy makes another appearance.