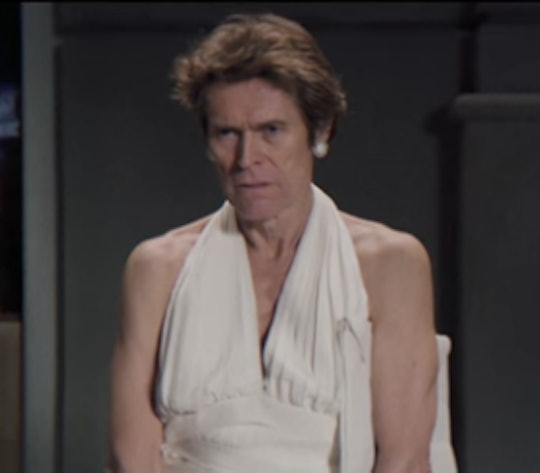 Super Bowl season brings with it the promise of delicious food, adorable puppies, to-die-for kitties, dozens of grown men chasing around an inflated (or deflated, depending on whether or not you're a Patriots fan) ball, Beyoncé (bless), and the much-anticipated Super Bowl ads. One of my favorites is the always-funny Snickers commercial, and this year in honor of the Big Game, they've upped the ante on their talent. Instead of featuring the real-life Norma Jean, there's a real-life man playing her character. So, who is the actor playing Marilyn Monroe in Snickers' Super Bowl ad? At first glance it's not entirely easy to tell (you're greeted with a set of legs and the now-infamous subway grate and ivory dress as the camera pans up toward "Marilyn's" face), but once you see who it is, it's absolutely impossible to unsee who it is (and I mean that with all the love in my heart). Willem Dafoe plays Marilyn Monroe in the new Snickers ad, and what I thought was going to be an entirely off-base, tasteless, and insensitive commercial isn't actually all that bad.

The 30-second spot released by Snickers ahead of the game on Tuesday revisits the iconic movie scene, only now it's Dafoe who's standing where Norma Jean Mortenson once stood. Instead of depicting Monroe's The Seven Year Itch scene perfectly, Dafoe as Marilyn is grumpy, aggravated, and — what else? — hangry. After being told by the director, "Sweetheart, don't look at me like that, it's going to be amazing," Dafoe fires back: "Who's the genius who puts a girl in heels on a subway grate?" (All these years later and I am still wondering the same thing.) Looking less-than-thrilled, Dafoe is so hangry, in fact, that one of the studio aides hands over a Snickers, insisting that Monroe gets a "little cranky" when hungry. Dafoe takes the bait and like magic, the *real* Marilyn appears:

It isn't the first time that Snickers has used a man to portray a woman. Last year's Super Bowl ad, according to TODAY, featured Steve Buscemi and Danny Trejo as Jan and Marsha Brady. And Dafoe is no stranger to Super Bowl ads, either. In 2013, according to AdWeek.com, Dafoe played the devil himself in a Mercedes-Benz ad. The ad also featured Kate Upton and Usher.

And OK, even though I'm not totally sold on the idea of a man playing a "cranky" woman all for the sake of the punchline of a joke, at least Dafoe gets the ridiculousness of the situation. Sure, it's not enough, but at least we get a five-second cameo from Eugene Levy?