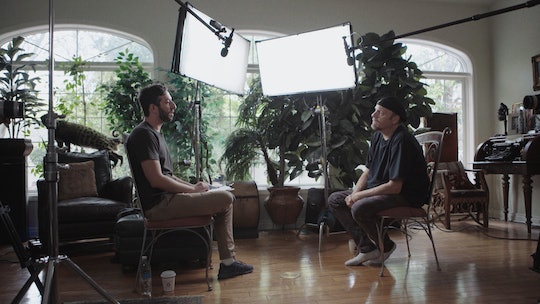 'The Amazing Johnathan' Chronicles The Magician's Antics With A Bizarre Twist

Hulu's The Amazing Johnathan, premieres in select theaters and on Hulu on Aug. 16. If you haven't heard, the documentary chronicles the story of magician and illusionist, John Szeles. Due to his unbelievable acts on stage, he became known as "The Amazing Johnathan." Many may know Szeles as the magician who defied death after a terminal diagnosis, but who is "The Amazing Johnathan" really? There may be more to the man than his mystifying illusions.

First-time feature filmmaker Ben Berman's Hulu documentary, The Amazing Johnathan, details Szeles's rollercoaster journey. Well, kind of. The film isn't so much about Szeles as it is about the creation of the documentary after Szele's drops the seismic bombshell that there is another documentary being made at the same time. To know why this twist is the magician's greatest trick yet, you'd have to understand the man behind the documentary. Szele's longtime residency in Las Vegas (13 years), his terminal diagnosis of cardiomyopathy, and his multi-year absence from all public venues prompted the filmmaker to dig further into the mysterious world of the real "The Amazing Johnathan."

Szeles has performed all around the world, including for President Reagan and the president of France. When filming first began, Szeles told OC Register, "They went all out; went to my high school, interviewed people in my life, including my mom, it was cool. It’s good to be alive to see it. Not a lot of people get a documentary until they’re dead."

Berman explained their first meeting in an interview with Esquire, saying Szeles greeted him at the door with a walker and "looked and sounded ill." Within moments, Szeles tossed the walker and confessed it'd been a prank. "At the time, I was just like, 'Oh, that's funny. That's amazing,'" he said. "But then looking back on it, I was like, 'Oh, even back then, you just never know what's real, what's not.' Is he ill, is he not? What's real, what's truth, what's illusion?" That right there sums up the essence of both the documentary, and Szeles himself.

After the initial diagnosis, Szeles retired to live comfortably with new wife Anastasia in their Vegas home while planning a series of "farewell" shows. Since then, "The Amazing Johnathan" has surpassed the "one year to live" mark, defying all odds. Six years ago, Szele received the devastating diagnosis. Cardiomyopathy is a degenerative condition in the heart muscle that can be fatal, according to The Mayo Clinic. Despite all of this, the successful solo comic magician invested in a members-only drive-in movie theater called Amazing Underground, hosted an online talk show called Burn Unit, and continues perfecting his illusions for new fans and old. Now? He's a live and well, promoting the meta documentary. In July 2017, Szeles explained why he never gave up on what he does best. "The thing is, they gave me a year and a half and that was almost three years ago, and I get tired of sitting and waiting for it to happen," he said. "So I just thought, I’m going to go back to work. … If I die, I die on stage, rather than in my bed."

In the same OC Register interview, Szeles added, "I’ve done everything I’ve wanted to do. I’ve had a great career. I’ve played where I want to play. I’ve done TV. I’ve gotten to do Letterman and all of these different shows that most comic magicians haven’t gotten to do." Maybe The Amazing Jonathan diverts from Szeles's origin story, but at the core, it's the magician's prerogative to allow you to know what he wants you to know, isn't it?

The Amazing Johnathan is now streaming on Hulu.