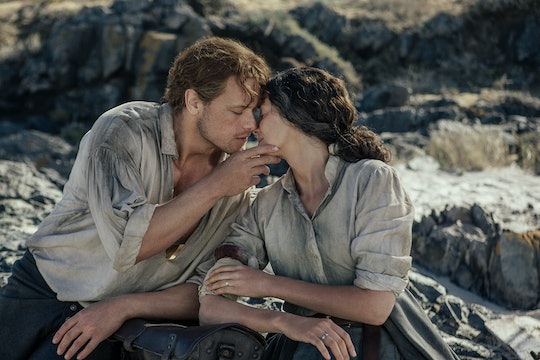 We Need To Talk About The Mysterious Prophecy On 'Outlander'

Things have taken a decidedly more mystical turn on Outlander in the third season's penultimate episode, in which Geillis Duncan extracts a prophecy from a rather put-upon seer that makes no sense. Or does it? One part in particular seems especially puzzling. So who is the baby in the prophecy on Outlander? Thanks to some very helpful analysis by Geillis and said seer's brother Archibald Campbell, the full verse was translated into plain English to help give us a better idea of the whole picture. Geillie doesn't seem to quite understand it, but boy oh boy I think it could mean some bad news for Jamie and Claire. And for their, ahem, progeny. Let's dive in and break this down as best we can, shall we?

The seer, Margaret Campbell, was first introduced back in Edinburgh, when Claire was called upon to treat her because of her "nerves," though I feel like now that probably had more to do with being under the control of her abusive brother. The pair now live with Geillie, who needs Margaret's special talents to tell her exactly when Scotland will be free from England. Those of us with insight into the future (all of us) know that Scotland won't be independent any time soon. But since this is Geillie we're talking about, she hasn't given up hope that her dream will one day come true and she's determined to see it happen.

Margaret's prophecy, stated in verse, seems to refer to an impossible baby. She said:

Lord John, to whom the prophecy was recited, declared the amusement "peculiar," while everybody else (including the viewers) said, "Huh?" Luckily, Geillie and Archibald tried to break it down right afterwards.

The course of "12 hundred moons" means 200 years. Any time someone mentions a span of 200 years in this show, everyone's alarm bells should go off since that's how many centuries apart Jamie and Claire used to be before going through the stones. Archibald goes on to explain that "woman's curse" means childbirth, while "man's attack" means insemination. The "issue" referred to is the resultant child, which must be killed, apparently. In summation, Scotland will have a Scottish ruler when a baby is born 200 years after it was conceived — and then killed. Who is this baby then? If you think about it, it may sound like someone you already know.

I don't know about you, but to me that sounds a lot like Brianna Randall. She was conceived in 18th century Scotland then born in 20th century Boston. If Archibald is correct, and the baby needs to be killed on the day of its birth, well then it's too late for Scotland because Brianna grew up. She is now failing out of Harvard and cozying up to Geillie's direct descendant, Roger Mackenzie Wakefield. Geillie, who doesn't yet know of Brianna's existence, is seemingly bewildered. "I brought ye here to tell me when it will happen and instead you give me the bloody case of Benjamin Button," she snaps at Archibald.

Just in case you'd forgotten, Geillie is also from the future, and she knows that Claire is as well. She may not know about Claire's 20-year detour back to the 20th century or about her and Jamie's child, but she definitely knows that Claire is a fellow time traveler, and one who also happens to travel in 200-year spans. Geillie is clever, if not completely deranged, so I don't think it will take long for this cryptic message to lead her right to Claire and Jamie. And once she figures it out, what will she do to Brianna? Bree seems safe enough 200 years in the future, but Geillie's been practicing her magic skills. Could this have something to do with Abandawe? There's just one more episode to find out.