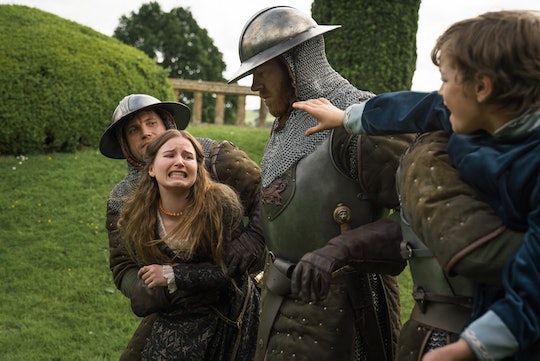 Teddy May Have A Tragic Story On 'The White Princess'

There are many elements to fifteenth century life that may shock someone living today; one in particular is the treatment of children. In Starz's The White Princess, this is exemplified by the character of Teddy. He's a young boy and Elizabeth of York's cousin. In the second episode of the series, King Henry VII felt threatened by Teddy and sentenced him to the tower. While the show is based on reality, it is a fictional retelling. Some viewers, then, may have questions about Teddy. So who is the boy in the tower on The White Princess? The Earl of Warwick actually has a tragic story.

Why did Henry punish a young boy? He was worried that Teddy may usurp his throne. Teddy was a member of the rival House York, and from what Henry saw, the public loved him. Henry was afraid that his reign was in danger, especially because the queen, Elizabeth of York, hadn't given birth to an heir to his throne yet. The king was paranoid of his power and took it out on Teddy, a child. Despite the fact that he is Elizabeth's cousin — and that his sister, Maggie Pole, begged for his release — Henry did not budge.

Teddy indeed existed; his full title was Edward Plantagenet, 17th Earl of Warwick. In 1485, when the War of the Roses ended and Henry claimed the English throne, he put Teddy in the Tower of London. He was only 10 years old. According to the Luminarium: Encyclopedia Project, he only emerged twice in his short life. Once was in 1487; he was paraded around London to disprove an imposter, Lambert Simnel, who had convinced some that he was the Earl and escaped from the Tower. The second instance was when he was beheaded in 1499, when he was 24 years old.

Teddy was executed after being accused of conspiring to escape the Tower and overthrow King Henry. He was charged along with Perkin Warbeck, a pretender to the throne. Both were accused of working together to commit treason. Given Teddy's devastating story, it will be interesting to see how the character's arc plays out in The White Princess. If the show is historically accurate, viewers may never see Teddy again. So far, the show has not shied away from showing the harsh realities of Tudor England. If it is fictional, though, the audience may be in for a surprise.