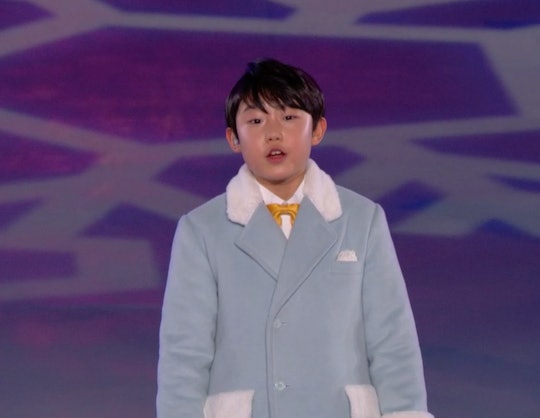 Who Is The Boy Who Sang The Olympic Anthem At The Closing Ceremony? Oh Yeon Joon Is A Viral Star

Having the opportunity to sing the Olympic anthem is a big deal, and at the 2018 PyeongChang Winter Games, that honor went to a young singer who grabbed the spotlight on a South Korean reality show. Who is the boy who sang the Olympic anthem at the closing ceremony? That would be 11-year-old Oh Yeon Joon, who appeared on Korea’s version of The Voice, according to The Guardian.

Though he may not be well-known in the United States, Oh Yeon Joon's appearance at the closing ceremony was exciting to many Twitter users, who were pleasantly surprised to see the young star on stage. In 2016, a then 9-year-old Oh Yeon Joon won the hearts of South Korean TV viewers when he appeared on the singing contest We Kid. According to AllKPop, his performance of “Colors of the Wind” brought the judges to tears and quickly went viral, earning over 1 million views on Facebook. And it's not exactly hard to see why: as the show's first contestant, Oh Yeon Joon beautiful performance left quite the impression, with multiple judges vying to work with him.

From the sounds of it, Oh Yeon Joon has been out of the spotlight since his TV days, but on social media, it looks like fans are thrilled to see him again.

On Twitter, tweets started rolling in during his Olympic appearance from fans who recognized the young star from his We Kid days:

While Oh Yeon Joon may have already won the public's heart in South Korea, it sounds like his Olympics performance has also allowed viewers throughout the world to fall in love with him as well:

Although there isn't a ton of information on the boy's career, or on what his next moves might be, he definitely seems to have made his mark with his Olympic performance (and, I mean, he's only 11, so he's got plenty of time to figure out his plans for global music domination). But as far as the performances at the closing ceremony go, Oh Yeon Joon is clearly in good company — and in fact, he wasn't even the only incredibly talent young person to take the stage. Earlier in the ceremony, 13-year-old guitarist Yang Tae-Hwan, pulled off a seriously-impressive performance of Vivaldi’s the Four Seasons, according to The New York Times, and the South Korean national anthem was also sung by a group of talented children.

Despite his moving performance though, Oh Yeon Joon wasn't exactly the biggest musical star of the evening. That's because the popular K-pop boy band EXO closed out the closing ceremony with a highly-anticipated performance, according to USA Today, and honestly, people were totally psyched. In fact, not only was Russian figure skater Evgenia Medvedeva beyond excited about the band's appearance at the Olympics, she wrote on Instagram Sunday that meeting the nine-member group was a "[dream] come true."

Of course, now that the 2018 PyeongChang Olympics have come and gone — with a little help from South Korea's best musical stars — the countdown begins until the 2022 Beijing Olympic Winter Games, where the world's best athletes will once again come together to compete for gold. According to the Olympic Games website, the theme of the Beijing games will be a “Joyful Rendez-vous upon Pure Ice and Snow,” and is being designed with the goal of "[inspiring] the youth of China with the Olympic spirit." And while it might be too soon at this point to say what viewers can expect from the performances at the opening and closing ceremonies, it's clear that PyeongChang certainly set a high bar.

As for Oh Yeon Joon? He's definitely impressed the world with his beautiful voice. And it sounds like he has many new fans as a result of his seriously impressive anthem performance.