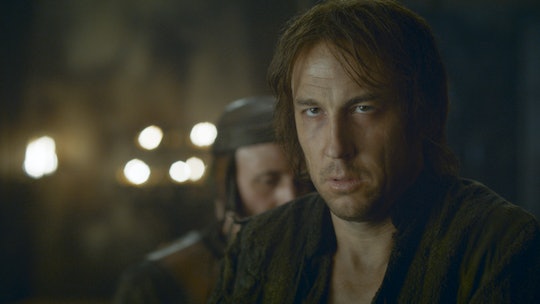 Who Is The Broken Man On 'Game of Thrones'? The Hound Could Be Coming Back

Episode 6 of Game of Thrones was not as traumatic, exciting, or heart-wrenching as Episode 5 (Hodor, forever), but it did set up some intriguing plot points that will hopefully be at least partially resolved in Episode 7. The episode is entitled "Broken Man," and from the promos it looks like much of the action will be taking place at Riverrun. Some fans of the show are already speculating that this episode could mean the return of Sandor Clegane, who is currently presumed dead. Could The Hound be the titular "Broken Man?"

Before the season premiere, actor Ian McShane, who will be appearing in this season of Game of Thrones, dropped some major hints about his character.

My character is like an ex-warrior who has become a peacenik...So I have this group of peaceful (sort of like a cult peaceful tribe) who have brought back a much loved character everybody thinks is dead. I'll leave it at that.

His "peacenik" tribe could possibly be a group of "broken men" defined in the books by Septon Meribald as army deserters who now live as bandits. And as for the much loved character that everybody thinks is dead, well it's obviously not Jon Snow, and many Game of Thrones theorists are sure it is in reference to The Hound. Why might this be? Well, it would go a long way toward confirming another, more bizarre, fan theory, that of "Cleganebowl," in which brothers Gregor Clegane and Sandor Clegane fight to the death in a trial-by-combat for Cersei Lannister. She did mention that she would have a trial by combat in Episode 6.

So, could The Hound be returning in Episode 7? Wait... didn't he die? Well, maybe. When we last caught up with the knight formerly known as Hound, Arya was leaving him to die after his fight with Brienne. But we never actually saw him expire. And as far as I'm concerned, no body means no death.

Other evidence supporting the theory that The Hound could be coming back can be found in the books. Though the show has diverged quite a bit from the source material in the past couple of seasons, the backbones of the story remain basically the same. In the books, Brienne comes across a monastery, where a gravedigger tells her that The Hound died, and he buried him himself. Tellingly, the gravedigger only says "The Hound," and never "Sandor Clegane." Many take this to mean that the gravedigger was speaking metaphorically. Perhaps "The Hound" did die, "The Hound" referencing the dark, violent, evil part of the man. Sandor Clegane, the good man, the one who protected Arya, is alive and well.

In this case, it's possible that Sandor Clegane, no longer The Hound, is actually a part of this "peacenik" group of "broken men." And we could be seeing him very soon.