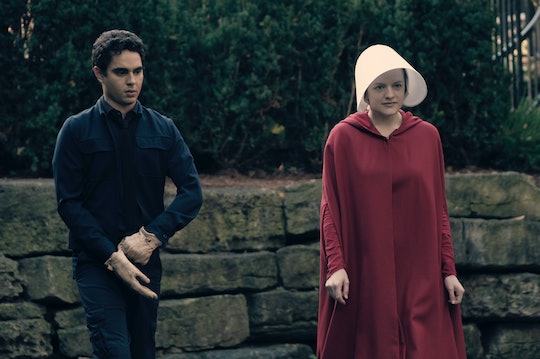 Someone Is Watching Offred On 'The Handmaid's Tale'

Warning: spoilers from Episodes 2 and the original novel ahead! At the end of the premiere episode of Hulu's The Handmaid's Tale, Offred's fellow handmaid Ofglen issued a warning: Offred should be careful, because there was an Eye in her house. In the world of Gilead, the Eyes of God are the secret police always watching and waiting to see if someone is breaking the rules in some way. The atmosphere of Gilead is one of surveillance and distrust, where you never know if the person you're with is a true believer or someone on your side. Anyone can be an Eye. But who is the Eye on The Handmaid's Tale?

The easiest assumption to make is that the Eye is Nick, Commander Waterford's chauffeur. According to Ofglen, who is part of some kind of secret network of information, a lot of the drivers in Gilead are Eyes. That would put them in the perfect position to keep track of what was going on in the house. And Nick is certainly a suspicious figure, though most people are in Gilead. But while he witnessed Offred breaking rules and even aided her in doing so (he saw her outside in her nightgown, and also told her about the Commander's desire to see her alone), he didn't report her. He only warned her. In the first two episodes, Nick didn't tattle on anyone when he could have and should have, if he was truly an Eye.

In the novel the series is based on, it's unclear whether Nick is an Eye or not for almost the entire length of the story. Offred is never quite able to trust him fully even as their relationship deepens and she reveals things from her past to him. Nick tells her that he's actually a member of the Mayday resistance (the same network Ofglen belongs to), but Offred isn't sure he's telling the truth. He could be an Eye posing as a member of the resistance. However, the end of the novel implies that he did aid Offred in escaping, proving that he was one of the good guys.

It is too early in the show's run to determine whether it will follow the same path. Though Nick and Ofglen ostensibly could belong to the same organization, neither appears to be working together; in fact, they both actively warn Offred about each other. And there are a limited number of people in the house who could be Eyes, making Nick the only possible option. Neither Rita (the Martha) or Serena Joy could be Eyes because they are women; the Commander is much too high ranking. Nick is the only one who fits the profile.

It is possible that Nick is a member of the resistance posing as an Eye. It would be an incredibly useful position for a spy, allowing him to know exactly what was going on in Gilead from the inside. The problem is that no one is truly trustworthy in this world, so without more information, Nick remains at the top of the suspect list.