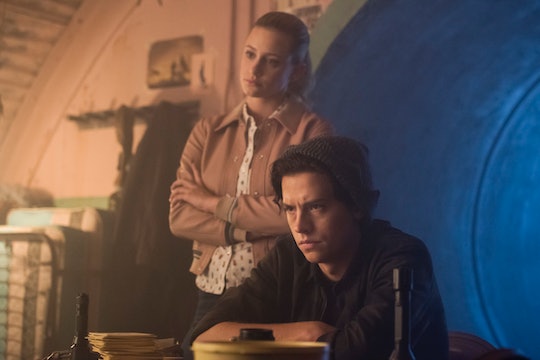 In it’s past two seasons, Riverdale has had its fair share of murderous villains, but Season 3 introduced a whole new monster. Dubbed the “Gargoyle King,” this season’s killer looks like a gory creature, donning a horse's skull that is covered in blood and wearing wings made of bloody sticks. So is he a man or a monster? Fans want to know, who is the Gargoyle King on Riverdale?

Warning: Spoilers for the first three episodes of Riverdale Season 3 ahead.

You can bet that the cast and crew of Riverdale isn’t divulging any of this season’s secrets, so to find out the Gargoyle King’s identity, fans will have to continue watching through Season 3. But there is one answer fans can find comfort in. In an interview with Us Weekly, Riverdale showrunner Roberto Aguirre-Sacasa revealed that although the Gargoyle King shares supernatural features similar to The Dark Lord from his other series, The Chilling Adventures of Sabrina, he is, in fact, just a man. “The Dark Lord is the supernatural devil and the Gargoyle King is most probably a guy in a mask,” he told the outlet.

But who this guy is, and why he’s killing Riverdale kids is still a mystery. Season 3 started with Dilton Doiley (Daniel Yang) and Ben Button (Moses Thiessen) playing a game called “Gryphons and Gargoyles” at Pop's Diner, and when Jughead asks them about it, they keep the game’s details a secret. But later, Dilton comes to Jughead in a panic, telling him that the game is much more dangerous than he thought. "Ben and I thought it was just a game, a stupid role-playing game, but it's not," he says. "It's so much more. He's real." When Jughead asks who Dilton is talking about, he tells him it’s "The Gargoyle King."

Jughead heads off to Archie’s trial, but when he returns home, he finds Dilton missing and sees a paper scribbled with symbols and a creepy stick figure in a park he recognizes. He heads to the park and finds Dilton and Ben unconscious, kneeling over a sacrificial altar with bloody symbols carved into their skin. As Jughead goes to help them, Ben begins to choke and spit out green liquid. In Episode 2, it is revealed that Dilton and Ben were poisoned with cyanide, and Dilton doesn’t survive.

Ben eventually jumps from his hospital window to his death, and Betty and Jughead learn that Ethel has been playing the game as well. When going to visit her in Ben’s bunker, the duo catches their first glimpse at the Gargoyle King in the woods. He’s a tall, scary creature, with a bloody skeleton mask, dark robes, and creepy wooden wings. When Ethel has a seizure and is sent to the hospital, the Gargoyle King pays a visit to her room as well.

By Episode 3, it seems that Betty and Jughead are in full sleuth mode, trying to figure out who the Gargoyle King is. When Ethel returns to the bunker, they ask her to see a copy of the Gryphons and Gargoyles rule book, which she only hands them after Jughead drinks from the poisoned chalice and is initiated into the game. Jughead brings the rule book, called the “King’s Scripture” home, but when FP finds it, he throws it into the fire, telling his son that the game is “pure evil.” Meanwhile, Betty — who is trying to connect the game to the Farm — learns that her mom, Alice, played the game when she was younger, and had confessed to something having to do with a dead body.

The fact that both FP and Alice know about the game is going to play a huge part going forward, and Aguirre-Sacasa told Entertainment Weekly that the new Nov. 7 flashback episode will help fans connect some dots. “You know one of the things that the kids discover pretty early on is that the murder victims in the present were playing a game called Gryphons & Gargoyles, which is of course the Riverdale version of Dungeons & Dragons,” said the show runner. “And what our kids in the present discover is that their parents, when they were in high school, were also playing this game, and there was a similar murder that happened in the past.”

Knowing that the “Gargoyle King” is human makes the mystery all the more intense. Is he one of the kids’ parents, like the last two villains, Hal Cooper and Clifford Blossom? Or is the Gargoyle King one of the Riverdale kids themselves? The mystery is just getting deeper on Riverdale, so fans will have to wait and watch to find out.