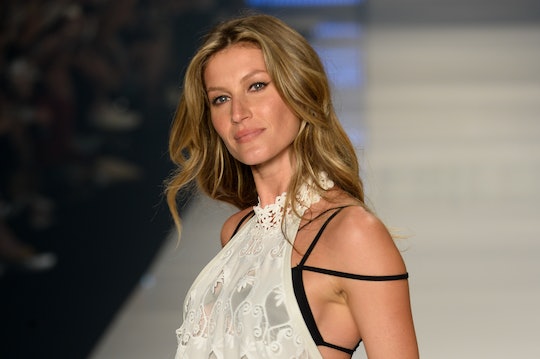 Who Is ‘The Girl From Ipanema’? Gisele Bundchen Will Impersonate Her At The Olympics

Even though it’s been more than 50 years since "The Girl From Ipanema" made its debut, almost anyone can recognize the lyrics to the iconic bossa nova worldwide hit. The infamously elusive girl from Ipanema — an affluent neighborhood in Rio de Janeiro — is, as the song depicts, "tall and tan and young and lovely." But, after all these years some may be wondering who actually inspired this unforgettable Brazilian jazzy song and may ask the question: Who is the "The Girl from Ipanema"? Former Victoria's Secret Angel and Brazilian supermodel Gisele Bundchen is reportedly portraying her at this year’s Olympic opening ceremony in Rio de Janeiro, so now's the time to figure it out.

After announcing her retirement from the runway last year, according to The Daily Mail, Bundchen is ready to return to the spotlight, portraying the infamous girl from Ipanema in the kick off Opening Ceremony for the Rio Olympics on Friday, Aug. 5. The details of the performance had reportedly been kept under wraps, but it’s expected to be grand production, featuring thousands of performers that will celebrate Brazilian culture.

According to The Daily Mail:

Insiders say it will feature 6,000 scantily clad performers and that the theme will be ‘the evolution of the people of Brazil’, featuring tributes to the rain forest, Brazil’s famous Carnival and the country’s love of sensual dance and the female form.

The song describes the idea of a typical Brazilian woman , so it’s not too surprising that Bundchen will be portraying “The Girl from Ipanema.” She is, after all, famous around the world for being a gorgeous supermodel and a beautifully iconic and sexy figure who happens to come from Brazil.

As for the real inspiration behind “The Girl From Ipanema,” that title belongs to Heloisa Pinheiro, a Rio native who caught the attention of the men who wrote one of the world’s most recorded songs: Antonio Carlos Jobim, the song’s composer, and Vinicius de Moraes, a Portuguese poet.

"When they saw me, they would whistle and shout out, 'Hey beautiful girl! Come over here,'" Pinheiro said in an interview with The Guardian in 2012. "I did not know who they were until years later."

Pinheiro, who is better known in Brazil as Helô, was just 17 years-old in the early 1960s and would walk past the Veloso bar on the beachfront of Ipanema every day. Since the 1962 hit, she has become a well-known celebrity in Brazil and often does TV appearances and magazine photo shoots. She even became a Brazilian Playboy Playmate in 1987 and once again in 2003.

Even though Pinheiro never profited from the legacy of the sultry song itself and hasn't claimed that she should, she still claims to love it.

"It's eternal. Whenever I listen, I remember my past, my younger days,” she said in the same interview with The Guardian. “Ipanema in 1962 was a great place. You never saw aggression. Everyone wanted to fall in love. It was the spirit of bossa nova – tranquil and romantic. Today, you don't see composers in the bars and restaurants. There isn't the same inspiration."

The Daily Mail predicts that Bundchen's Olympic opening ceremony performance this Friday will be the "sexiest ever." Given the legacy of the song and the woman she will reportedly be portraying, it's definitely expected to attract a global audience, estimated at a billion people. "The Girl from Ipanema" has had everyone humming along for more than 50 years and it's a safe bet that you won't get it out of your head any time soon.