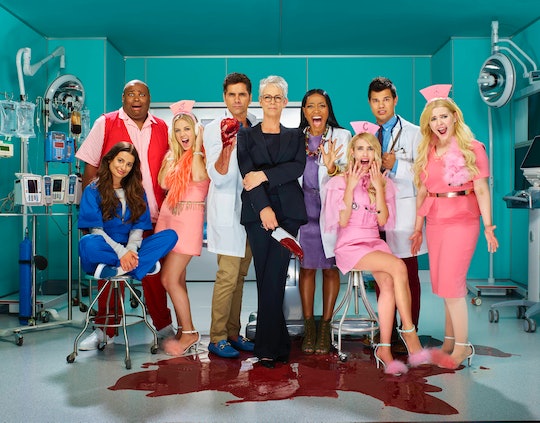 Who Is The Green Devil On 'Scream Queens'? Season 2 Has A New Villain

Scream Queens Season 2 has brought with it a new setting and new threats, though some might say they feel pretty similar to the old ones. The Red Devil of Season 1 is no more: that trio of killers was done away with, with two members ending up dead and the third (Hester, played by Lea Michele) sent to prison at the start of Season 2. Now there's a new masked figure stalking the halls of the hospital, though this killer has had a change in color scheme: a Green Devil is the one causing trouble this year, wielding a blade and casually decapitating people to the soundtrack of Dirty Dancing. But who is the Green Devil on Scream Queens?

Though the new Devil's identity is still a giant green question mark, Season 2 did open with something of an origin story in flashback form. On Halloween 1985, a huge party was going on in the hospital and the staff was more concerned with dancing it out to Sheena Easton than looking after their patients. This resulted in Jerry O'Connell's Dr. Mike promising to help a man named Bill (Jeremy Batiste) suffering with COPD and then simply dumping him into the nearest swamp, which was so close it was a mere skip and a jump from the hospital doors. Notably, Dr. Mike also throws his costume in after his victim just in case anyone spotted him disposing of a body in it. His costume was a cape and a monstrous green mask that's about to become very familiar.

While it may seem like the dying man dropped in the swamp is the Green Devil, that's just one of a few possibilities. There's always a chance the swamp has weird mystical properties that fused that mask onto Bill, reanimated him, and sent him back into the hospital bent on revenge. Weirder things have happened both in horror movies and on Ryan Murphy shows. But there are other options: Bill's wife and unborn child were left behind when he was disposed of, leaving two more people who might be looking for vengeance. Considering how important Season 1's baby in the bathtub turned out to be, there's a real chance Bill's son might be the one looking to avenge his father.

There's also the urban legend Dr. Mike's nurse helper hinted at as they stood at the side of the swamp. She mentioned growing up in the area as a kid and remembering stories of a monster who lived in the swamp called the Green Meanie. (Which I seriously hope is not the official name of this year's villain, because it is far from intimidating.) Perhaps there was a preexisting threat lurking in the swamp that ended up using the mask.

Or maybe the killer is none of the above. There's a lot the audience doesn't know right now, and any upcoming details could change everything. The person behind the Green Devil mask could be someone that hasn't been introduced yet, someone who is just utilizing the hospital's shady past (bodies in the swamp included) as a cover while they terrorize everyone within its walls.

Still, if we're using Season 1 as a blueprint then my money is on Bill's baby.