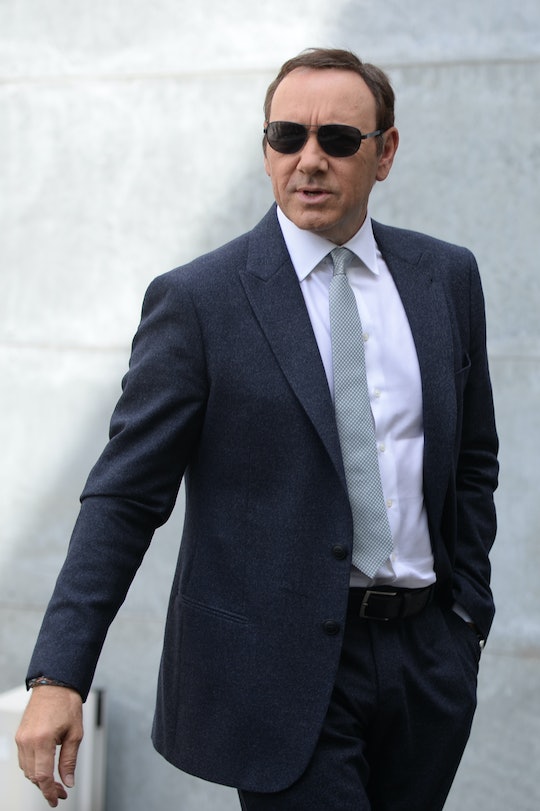 Who Is The Guy Kevin Spacey Brought To The 2016 Emmys? Twitter Is On The Case

In the advent of social media, one of the best parts of watching live events is figuring out the identities of random hotties in the background of cutaway shots. In the case of this year's Emmys, Twitter is dying to know who is the guy Kevin Spacey brought to the 2016 Emmys?

Well, here's one theory: it looks like it's Evan Lowenstein, a talent manager who is perhaps best known as one-half of the late-'90s/early-'00s folk-pop duo Evan and Jaron. Does that ring a bell? If not, come and take a trip into the Wayback Machine with me. The year was 2000: Evan and Jaron Lowenstein were vaguely attractive twin white boys who played guitar and wore denim jackets. They had exactly one hit single, "Crazy For This Girl," despite recording a total of three studio albums together. They were basically one-hit wonders (though "wonder" is kind of a strong word for this particular type of bland, twangy, radio-friendly pop)

Evan went on to become a talent manager and founder of Stageit, a "live streaming platform enabling artists to give their fans a front row seat to a backstage experience." So how did he come to be on Kevin Spacey's arm at the Emmys? One thing's for sure: Twitter doesn't seem to think he's unqualified to be Spacey's date, at least in the looks department.

Some even speculated that this was somehow Kevin Spacey's (and a '90s heartthrob's, I guess) coming out. But alas, their relationship appears to be professional — at least, on the surface. Buzzfeed reports that Lowenstein is, in fact, Spacey's manager, and it's totally normal for your manager to be your plus one at the Emmys. It just doesn't hurt that he's very pretty and can fuel the 'ship of some folks' dreams (apparently).

But by the looks of Lowenstein's Twitter feed, you would think that Kevin Spacey is his only client. His account is filled pretty exclusively with Spacey retweets. (Which like, no shame. Promote your client, bro.) It's just not a huge surprise, then, as to why Twitter is alight with folks 'shipping the two. Unfortunately, Lowenstein didn't get invited to be in his client's PB&J bit with Jimmy Kimmel's mom, which featured his signature Frank Underwood deadpan.

But Lowenstein is still performing these days, and apparently that hat (or a version of it) comes with him everywhere he goes.

Luckily, he classed it up with a much fancier version for his Emmys appearance.