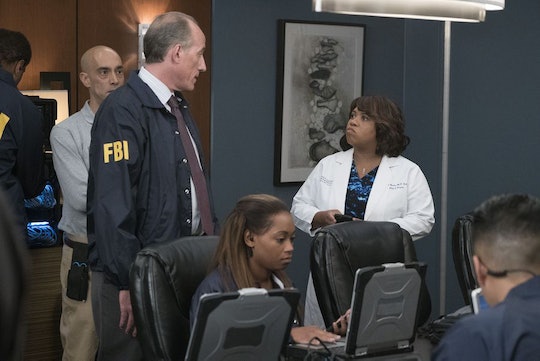 A Mysterious Hacker Attacked The Hospital On 'Grey's Anatomy'

The winter finale of Grey's Anatomy included a terrifying cyber attack that led to a lot of trouble for the doctors. A hacker, or group of hackers, got into the hospital's network, shutting down everything from the heart rate monitors to the doors to the blood bank. But who is the hacker on Grey's Anatomy? It could be anyone.

It all began with the heart monitors all going off at the same time, making one of the interns ask, "Why is everyone dying?" (Seriously, how did these interns get hired?) Anyway, it soon became clear that this wasn't some random malfunction when no one could get into the medical records. That's when the hacker then made him or herself known, announcing on the screen that they'd taken over the hospital and the only way for the hospital to get control back would be to pay them 5,000 bitcoins.

Unfortunately, Dr. Bailey and Dr. Webber wrongly assumed 5,000 bitcoins was basically the equivalent of around $5,000, but in reality that ended up amounting to $20 million. Still, Dr. Bailey was willing to pay it if it meant saving her patients' lives, but the FBI agent who was on the case wouldn't allow it, pointing out that if they paid the hackers, it would set a precedent for other hackers in the future to do the same thing to other hospitals. Instead, he urged her to let the team try to work it out first.

In the meantime, Dr. Bailey tried to figure out why the hacker would attack the hospital anyway, and realized it was because of the contest she'd recently announced. If you don't recall, Avery decided to give a good chunk of his inheritance to Bailey so she could start a contest similar to the Harper Avery Award. Thus, since Bailey announced the award, the hacker knew that the hospital had at least $20 million to spare. That doesn't explain who was behind the hacking though.

Truthfully it could be anyone. Most likely the hacker probably doesn't have anything against the hospital or any connection to it. They just want the money and knew Grey Sloan Memorial Hospital was a good way to get it. It wouldn't be surprising if it was later revealed that the hacker was just some random person who no one at the hospital even knows.

Still, if it were going to be someone with a vendetta against the hospital, it's hard to say who that person would even be. As of late, the hospital hasn't exactly wronged anyone. Perhaps someone could be upset that Meredith won the Harper Avery, but that doesn't really make sense. The only other possible explanation is perhaps another hospital is trying to take down Grey Sloan and this was there way of doing so. Honestly, who knows?

The point is, the hacker was successful and made everyone's day 10 times worse. Alex, Amelia, and Jo weren't sure if they could give a child the medicine he needed; Maggie and Avery had to transfer an elderly man to another hospital in a helicopter; Meredith had to use an intern for a blood transfusion for her patient; and Arizona had to help someone give birth to her baby in a hallway. All in all, it was an absolute mess.

One highlight of the whole thing was seeing Bailey take charge with the FBI. Tired of not being able to do anything, she made the call to Avery to have him wire the money to the hacker so they could get their tech turned back on, but, unfortunately, his phone was covered in blood and he was too busy trying to help a patient to even realize his phone was ringing. Hopefully, all the patients were able to be saved, but this is Grey's so I won't get my hopes up.

You can find out how this plays out when Grey's Anatomy returns next year on Thursday, Jan. 18, 2018.