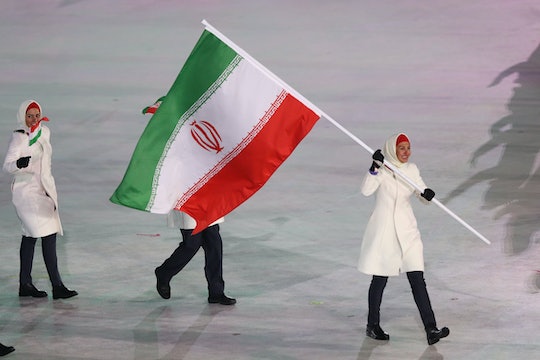 The parade of nations during the opening ceremony of the Olympics is a very big deal. During the parade of nations, athletes make their debut, some marching into the Olympics for their first time ever. Because of this, certain athletes gain a lot of attention during the opening ceremony — and one athlete had people wondering who the Iran flag bearer was after she was overcome with emotion. That person was Samaneh Beyrami Baher, and she is freaking awesome.

There are over 80 million people who currently live in Iran, according to projections from World Population Review — but there are only four athletes competing for the country of Iran during this year's Winter Olympics and representing the country. They are only competing in two events — alpine skiing and cross country skiing. Because there is so many people and so few athletes representing them, their presence in the Olympics makes it all the more powerful.

Baher, a cross country skier who was carrying the flag for her country, had tears in her eyes as they marched through the parade of nations. People on Twitter definitely took note of this, taking to the website to share their opinion on how they felt about her — needless to say, they were pretty taken by Baher who was crying tears of joy as she held the flag of her nation.

How could you ignore how happy and sad she looked at the same time?

But there is more of a reason to talk about Baher than just how happy she looked to be holding her country's flag. As previously stated, Baher is pretty darn awesome not for the fact that she is competing in the Olympics (which makes anyone cool automatically) but the fact that she is a super accomplished athlete. Baher is the only female athlete on her team, according to Aljazeera, and due to limited snow in Iran, Baher had to travel to Armenia and Turkey to train for the Olympics. Baher had to overcome limited access to snow and funds to train for the Olympics, according to Aljazeera, that her presence there makes it all the more important.

While Baher's competitors train all year round for the Olympics, Baher herself is only limited to training just a few months. And unlike her competitors, Baher must wear a hijab and skirt during her training to comply with her country's customs, according to Aljazeera. And you thought wearing a pencil skirt at your office job was difficult.

In addition to competing in the Olympics, Baher has also competed in alpine skiing at a World Cup level — so she's pretty good at what she does. Needless to say, Baher had to overcome a ton of adversity to hold that flag. And the fact that people on Twitter not only noticed this, but were super supportive of that, is so cool.

It's a huge honor for Baher to be carrying that flag for her country. The flag bearer for the parade of nations is typically picked by the Olympic teammates representing the country by way of vote, according to Deadspin. Baher's teammates must have recognized her hard work and saw her overcome that adversity to vote her into holding that flag.

Baher's tears of happiness symbolize a lighter moment during the Olympics. No matter what the results of this year's Winter Olympic Games may be, Baher made it to this moment to compete in the Olympics — and that is just as special and important as winning a gold medal. Viewers at home can only hope that they see Baher again, crying tears of joy on the podium receiving a medal when she competes in her event upcoming days.