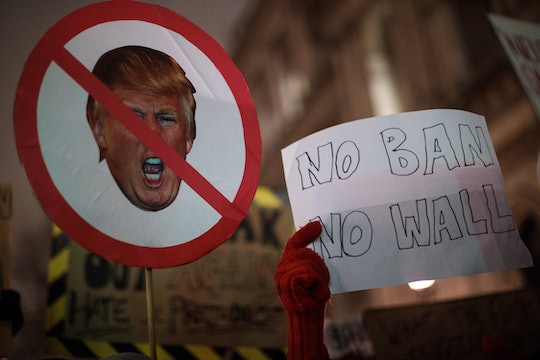 The latest version of President Donald Trump's travel ban was blocked on Wednesday evening by a judge in Hawaii who placed a nationwide halt on the executive order, just hours before it was slated to go into effect at 12 a.m. Eastern Time Thursday. According to the Associated Press, U.S. District Court Judge Derrick Watson's block prevents the travel order from taking effect as scheduled, allowing travelers to continue to enter the country as before. In his ruling, Judge Watson employed Trump and former New York Mayor Rudy Giuliani's own description of the order as a "Muslim ban" as one of the reasons for his decision.

"The day after signing the first Executive Order, President Trump’s advisor, Rudolph Giuliani, explained on television how the Executive Order came to be," Watson wrote. "He said: 'When [Mr. Trump] first announced it, he said, "Muslim ban." He called me up. He said, "Put a commission together. Show me the right way to do it legally."'"

Watson was referring to an interview Giuliani had given to Fox News' Jeanine Pirro on Saturday, Jan. 28, in which Giuliani was asked whether the first travel ban was implemented as a way to screen out travelers from specific religious backgrounds. "Does the ban have anything to do with religion?” Pirro asked. “How did the president decide the seven countries [from which travelers and refugees are banned]?"

According to Quartz, Giuliani answered, in full,

OK, I’ll tell you the whole history of it. So when he first announced it he said “Muslim ban.” He called me up, he said, “Put a commission together. Show me the right way to do it legally.” I put a commission together with judge Mukasey [Michael Mukasey, a former federal judge], with congressman McCaul [Texas Rep. Michael McCaul], Pete King [New York Rep. Peter King], a whole group of other very expert lawyers on this, and what we did is we focused on, instead of religion, danger—areas of the world that create danger for us. Which is a factual basis, not a religious basis. Perfectly legal, perfectly sensible. And that’s what the ban is based on. It’s not based on religion, it’s based on places where there are substantial evidence that people are sending terrorists into our country.

Watson made clear in his decision Wednesday that he agreed with a petition lodged against the ban by his home state. That petition argued that the latest iteration of Trump's travel ban would also harm Hawaii's tourism industry, and would prevent families with relatives in the six countries listed on the new order — which include Libya, Syria, Sudan, Iran, Yemen, and Somalia — from receiving visits, according to the Associated Press. The ban, the petition added, would also limit "the [state's] ability to recruit foreign students and workers."

Unlike the conservative judge who handed down his own decisions against the previous travel ban, U.S. District Judge James Robart (a Republican-appointee), Watson is an Obama era-appointee who was confirmed by the U.S. Senate in April 2013, according to his official bio. A Harvard Law grad who received his J.D. in 1991, Watson went on to become Assistant United States Attorney for California's Northern District from 1995 to 2000 and worked at the San Francisco law firm Farella Braun + Martel LLP, where he focused his efforts on "product liability, toxic tort, and environmental cost recovery litigation."

From January 2009 to April 2013, Watson served as the Assistant United States Attorney in the District of Hawaii. In November 2012, President Obama nominated him to the bench, where he took over the seat vacated by Judge David Alan Ezra, a Reagan-appointee, following a Senate vote of 94-0.

Up until this week, Watson had let a mostly quiet career-life, all things considered. On Wednesday, the relatively unknown judge found himself at the center of the latest travel ban firestorm. Despite the divisive nature of the topic, Watson declined to hold back his true feelings about the order, even writing at one point,

The illogic of the Government’s contentions is palpable. The notion that one can demonstrate animus toward any group of people only by targeting all of them at once is fundamentally flawed. ... Equally flawed is the notion that the Executive Order cannot be found to have targeted Islam because it applies to all individuals in the six referenced countries. It is undisputed, using the primary source upon which the Government itself relies, that these six countries have overwhelmingly Muslim populations that range from 90.7% to 99.8%. It would therefore be no paradigmatic leap to conclude that targeting these countries likewise targets Islam.