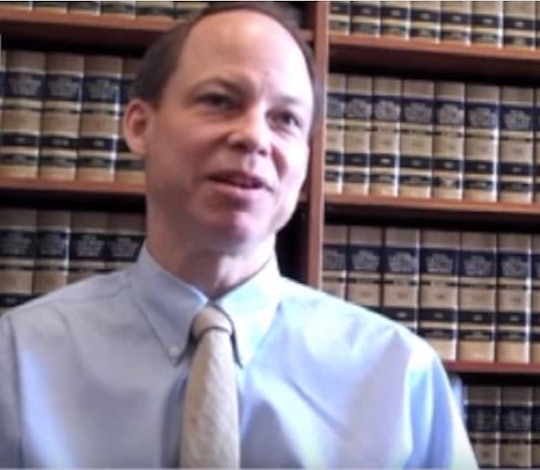 Who Is The Judge In The Stanford Rape Case? Aaron Persky Is A Stanford Alumnus

After former Stanford swimmer Brock Turner was found guilty on three felony sexual assault charges, each of which carries a minimum sentence of two years in prison, he was sentenced to an inconceivable six months in county jail, which will likely turn into three with good behavior. Now people want to know who the judge in the Stanford rape case was, and how they can get Santa Clara County Superior Court Judge Aaron Persky off the bench. A petition has been started on Change.org, noting that "the fact that Brock Turner is a white male star athlete at a prestigious university does not entitle him to leniency," and that Persky "failed to send the message that sexual assault is against the law regardless of social class, race, gender or other factors."

Persky himself is a former Stanford athlete, which some critics believe made him sympathetic to Turner. Stanford law professor Michele Dauber, a friend of the victim's family, told NBC News that she believes Persky was "very persuaded by the background of the young man as an elite athlete," and that he "ben[t] over backwards to accommodate this young man." San Jose's Mercury News reported that, as a district attorney, Persky once prosecuted sex offenders. A campaign biography written by Persky in 2002 took it as a point of pride, in fact.

These days, however, Persky seems to be more sympathetic, at least in this case where the defendant was young and white. During Turner's sentencing, according to The Guardian, Persky remarked that there was "less moral culpability attached to the defendant" because he was drunk when he sexually assaulted "Emily Doe." Turner still maintains that his victim consented to being digitally penetrated on the ground by a dumpster, though she was unconscious during the attack. Persky believes that "that’s his version of his events," and he's "not convinced that his lack of complete acquiescence to the verdict should count against him." Persky also said that the "media attention that has been given to this case has in a way sort of poisoned" Turner's life, and he didn't believe that state prison was the "antidote to that poison."

Persky is up for reelection, but as he's running unopposed, he won't appear on Tuesday's primary ballot. The Mercury News reported that a 600-signature petition could force a write-in campaign in November. Failing that, voters would need 80,920 signatures in order to hold a special recall election. The Change.org petition already has more than 300,000 signatures, though of course they aren't all from registered Santa Clara County voters. Dauber told The Guardian that she'll be launching a formal recall campaign this week.

More Like This
Keke Palmer Casually Drops Her Baby's Sex On Jimmy Fallon
Does The FDA's Plan To Limit Lead In Baby Food Go Far Enough?
Freeze! The Single From The New 'Bluey' Album Just Dropped
Josh Duhamel Is Glad He Took Fergie's Advice About Dating After Divorce
What Parents Are Talking About — Delivered Straight To Your Inbox