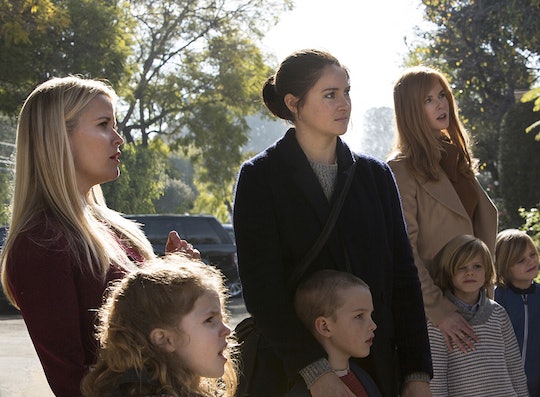 If you're already hooked on HBO's new series Big Little Lies like I am, you know you're in for a great murder mystery. Apparently, during what was supposed to be an innocent Trivia Night, someone amongst the community of parents was killed. Not only do we not know who killed them, but we also don't know who was killed — from the premiere, at least. If Big Little Lies follows the novel it's based on, we're in for the long haul in terms of finding out what went down. So who is the killer on Big Little Lies? It's probably not who you would guess.

As the title suggests, there's more than one "lie" told in the series. The webs woven between these characters go well beyond the murder on Trivia Night. The kamikaze parents of Monterey have their own share of secrets, and the only time we really hear them tell the truth is when they're in the interrogation room. As the premiere suggests, though, we'll definitely see inside the underbelly of the community. Who in this clan of parents, though, has the potential to kill? And who does someone hate so much that they are the target? (Warning: major spoilers from the novel ahead!)

It's easy to assume that Madeline may be one of the two, as from the premiere she seems to be one of the most prominent protagonists. Jane and Celeste, too, are in the fold. Of course, if you read the novel you know it's none of them, but the resulting murder involves them all. As it turns out, the murderer flies under the radar in the beginning of the story: it's Bonnie, the current wife of Madeline's ex-husband.

As we find out late in the novel, Bonnie's tragic past resulted in the murder of a man who commits similar abuse to what she faced. Will the series Big Little Lies stick to the story laid out in the novel? According to an interview with executive producer David E. Kelley in Variety, the show largely remains faithful to the original text. We can figure, then, that Bonnie remains the killer in the show, but we can't be certain. Perhaps the producers decided to take it in a different direction. No matter what, watching the story unfold will be exciting to see. Fans of the novel can either count on the plot they imagined will come to life, or be surprised themselves by a different ending altogether.